It really seems like iOS RPG games have all pretty much been re-skins of previous releases, all following in the same suit, and getting spoon fed to gamers through the AppStore. There’s hardly any originality anymore, and even if there is, it’s generally only one little aspect. Thankfully, The Game Bakers have come to the rescue with their new release, Squids. It’s a stretch back and flick controlled exploratory strategy action game with a well crafted story, turn based combat, items to equip, and characters to level up. In other words, a new breed within the RPG genre. 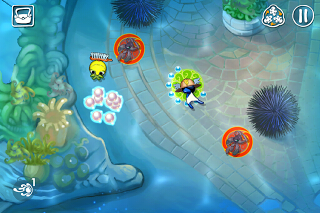 In Squids, you’ll control 4 characters as you try and save the depths of the ocean from being overrun by an evil force called The Ooze that takes control of it’s host, and turns it evil. There are 21 beautifully hand drawn and painted levels to try and make it through by choosing which 4 out of 7 characters you would like to use. There are 4 different classes that each of the seven characters will fall under; Shooter: these characters can shoot projectiles at enemies that are within range. Trooper: these characters pack quite a punch. Scout: scouts have a boost ability, which means they can make it into some sections that other characters can not, and will almost always be able to get to the end of the level before everyone else. They can also use their boost ability (which is done by tapping on the screen after you’ve flicked them) to increase damage done to enemies, or hit them a couple of consecutive times. Lastly, Healer: healer characters are generally pretty weak, but if you bump into another character with a healer character, they will heal that character.
Each character has a certain amount of moves they can make, but depending on how hard you flick them, those moves will vary. Each character will start off surrounded by orbs when it is their turn to move. Pulling your character back will show you how many orbs you will use in that one move before you let go and actually perform the move. You also have a certain amount of times that you can use your character’s ability each move, for instance, shooters can shoot projectiles once per move, while scouts have 3 dashes per move. There are jars with power-ups scattered throughout each of the levels, some containing items to help you defensively, some offensively, some health, and some give you back some or all of your movement orbs. These are collected when you pass through them, and do not stop your current move. There are also treasure chests and clams that you can bump into and gain pearls. Pearls are the in-game currency, and are also given out when you defeat an enemy, or accomplish a special move or maneuver, like hitting 2 characters in one shot or bouncing off and around 3 different corners without taking damage. These pearls are collected by tapping on them, so you will not need to waste a move to go back and collect them if you pass them up. There is also a star hidden in each of the levels, which will give you 500 pearls at the end of the level, along with re-filling your movement orbs and ability. At the end of each level, you will get a star ranking. These are given depending on how you preformed throughout the level. If you make it to the end of the level without loosing a character, that’s a star. If you find the hidden star in the level, that’s another star, and if you make it through the stage in a certain number of turns, that’s your final star. Each star will give you pearls, and you will also get pearls for completing the level.
There are IAPs in Squids, letting you buy pearls with REAL money, but with the amount of pearls you get in-game, you are not pushed towards buying those pearls at all. By level 8 my main scout was maxed out, and all of my other characters were 75% leveled up, and I had bought every equip item in the shop that had become available by then, so unless you want to max out your characters by level 2, the IAPs are completely un-necessary.
Now, to get to one of my favorite mechanics of the whole game. The hats that you are able to equip from the shop. Hats are hidden throughout levels in clams and treasure chests, and you can also unlock some hats after beating certain levels. The hats that you find in-game will be free once you get to the shop, and the hats that you unlock by completing levels will cost pearls. But, once you get a hat, you’ll notice they have stats, like heightened strength, defense, HP, but here’s the cool part, you can transfer those stats permanently over to the class of characters that the hat is made for. So if you get a hat that your scouts can equip, and it adds 2 hit points, 3 defense points, and 1 attack point, those points can be transferred over to all of your scouts, then your scouts will keep those points even if the hat is not equipped. It’s a very nice addition to the game mechanics, and really surprised me when I first noticed you could transfer stats over. Right away, it was one of the things I was telling people about, because I’ve never seen this done in a game before. 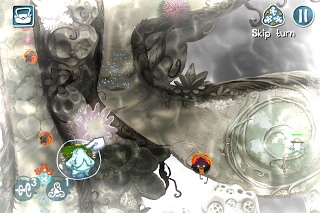 The game includes GameCenter support with a leader board and 22 achievements, so along with the star rankings, hidden stars, and training level, there’s more replay value than you’d first think with this being an RPG game. Squid’s story is well written and engaging, and the gameplay is packed full of action mixed with loads of strategy. It’s hard to believe the game is only $0.99, with the game lasting about 5 or 6 hours for your first play through, not including the amount of time it‘ll take to go back and get all the stars you missed the first time around or the amount of time you‘ll sink into training or getting the achievements/working up the leader boards. The Game Bakers have announced that they’re going to be releasing an iPad version in about a month, but if you really can’t wait, you can think of the iPod version as a 99 cent pre-release preview. It will be a little blurry on the big screen, but manageable. If you’re a fan of adventure, action, RPG or strategy games, this one is definitely a must buy. The developers are hard at work making the iPad version, as well as making the original even better by taking suggestions.
Squids gets a perfect score of 10 out of 10, along with a strong recommendation.