Tero is a platform game from Studio Yomi. Instead of the typical virtual controls, Tero is one of few platform games that has tilt controls. Normally I despise tilt controls in platformers, but Studio Yomi has done a decent job in making it work. In the game you’ll play as Tero, who is trying to help rescue the Spirit Flowers using a special orange orb that shoots projectiles at enemies by pressing on the screen. To move, you tilt your device left or right, attacking is done by swiping down, jumping by swiping up, and strong attacking by jumping up and then swiping down over your enemy while in the air. The physics are nice and don’t feel floaty or weighed down, though sometimes tilting feels a little funny because the levels tilt, staying horizontal, instead of moving with the screen. 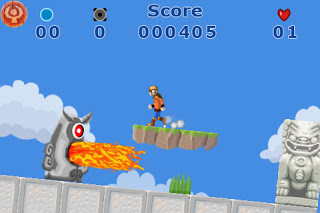 There’s 24 levels in Tero, spread across 6 different environments, with boss battles every 4 stages. The graphics are very smooth and polished, and the environments are vibrant and nicely varied. There’s plenty of enemies to keep you on your toes, some needing only to be attacked by a spin move, others needing to be pounced on, or attacked twice. There’s also some enemies that you can’t touch without loosing health. Hearts are collected while going through the levels by finding Spirit Flowers and collecting the flowers scattered throughout the levels. Checkpoints are also found in stages, but when you die, instead of going back to the checkpoint, you go back to the level select screen, then to start the level again at the last checkpoint, you need to re-enter the level, making it an un-necessary mechanic that really takes away from the flow of the game. However, once you loose all your hearts, you’re able to re-start the level from the beginning with 3, so there are no game-over screens in Tero, which is always nice.
Power-ups include your orb, bombs, and shields, but nothing else. Power-ups that let you shoot fire at the enemies, let you kill un-killable enemies, gave you super jumping abilities, let you run faster, or made you invincible for a couple seconds would fit in very well with the game. No online services are added, so going for a high-score is sort of a mute point. This also takes away from the replay value. Once you finish Tero, you won’t have much desire to go back and re-play it, but if you do decide to, you’re given the option of choosing Easy, Normal or Hard difficulties. You’re also given 3 save slots just in case you’d like to start at the beginning with a different difficulty, or share the device with a friend or family member. 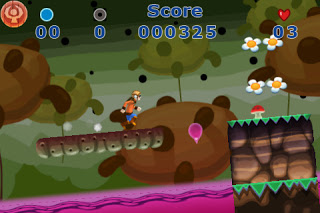 Sensitivity options for tilting would have been a good addition as well, and really, all platformers with tilt controls should have the option for virtual buttons. It’s what fans of the genre are use to, and love, and the fact that they’re not seen here is probably why this game isn’t selling very well. It is a highly polished and really good platformer, it just happens to be missing some pretty major features. It would also be nice to have seen some more story added to the game. With every boss battle you only get a little picture with the boss saying something like “I will crush you”. You don’t actually know why they kidnapped the Spirit Flowers, or why each monster has decided to help out the main evil behind the abductions. Including a story with the game would have made it well worth the download, regardless of the lack of virtual buttons.
The game is fairly new; it was only released a little over 3 weeks ago, so the developers do have plenty of time to fix these issues and add some features before calling it a bust, and I really hope they decide to keep working on Tero. The graphics and level design are really very good, and the environments and enemies are varied enough to keep any gamers attention. Just a little more work, and this could be a gem that gets a pretty decent fan following. Right now, for $0.99, it’s still very much worth the purchase, and is recommended to any fan of platformers that can forgive the tilt controls.
I’m giving Tero a score of 6.5/10
Link: http://itunes.apple.com/us/app/tero/id453105446?mt=8
Posted in: 0.99, Platformer, Syntheticvoid