Harkening back to the good old days of RPG’s is Muteki Corp’s newest game, Dragon Fantasy.  Right from the start with the hilarious intro you know this is going to be a great experience.  After the intro you start off in the kingdom of Wester where the new king is about to be crowned.  Then suddenly a Dark Knight comes and states that his master demands an audience with the prince who was going to be crowned.  Ogden(your in game character) chases after the Dark Knight to attempt to get the Prince back. 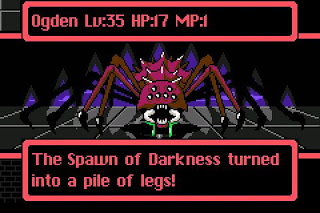 You control your character by dragging your finger in the direction you want your character to move in.  The controls are quite smooth and you can use any part of the screen for control.  You move across the expansive continent similar to how you do in Final Fantasy.  There are various towns, villages, and temples scattered across the land.  You will end up visiting most of these places in pursuit of the stolen Prince and there are no fetch quests like in KRPG’s.  Battles take place randomly as you go across the land and the combat is turn based.  You have four options while in battle: Fight, Magic, Items, and Run.  When you select Fight you automatically hit the opponent and there is a small chance that a critical hit(which makes the damage of your attack higher) will occur.  You gain Magic over the course of the game and can be useful when your in a pinch. The item option is self explanatory, you can select certain items that you have with you and use them in combat.  Run can be used when your too much of a wuss to fight a enemy and there is a small chance it wont work that round.  The battles are fairly fast paced and there isn’t loads of text you have to tap through to get to the next action.
—————————————————————
The graphics are simply awesome with beautiful 8-bit effects that seem like they’re coming straight from a arcade game. The 8-bit music is amazing as well and definitely adds a finishing touch to the game that makes playing through it all the more fun. 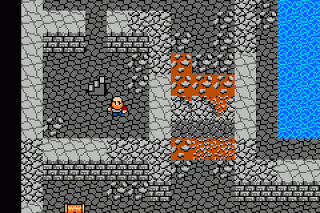 Overall this is a simply must have game that provides a humorous throwback to the good ol Retro RPG age. This should be anyone’s first forray into the AppStore RPG market.  I give it 5/5 Stars.
——————————————-
Price: 2.99 + Universal support
Link: Dragon Fantasy Link
Site: http://mutekicorp.com/