You know that
awkward moment when you are happily taking over the world with hundreds of
thousands minions that you created. Then they decide they should be in control
and try to overthrow you? Well the developers at Villain LLC have. AppStore
company Villain LLC  sprung onto the
market with their success of the highly acclaimed  iPhone and iPad app Archetype. Archetype an
Fps featuring things never featured on iOS shooters such as Capture the Flag
and downloadable content took hours upon hours of over 1.5 million players.
Villain has been silent ever since the release of Archetype and presto! We now
have our gaming fingers on Minions. 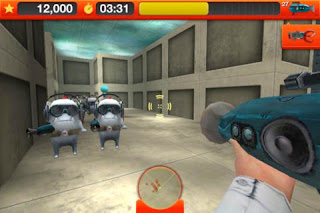 Minions relies on it’s whimsical cartoon
characters, seemingly a breed between the minions in Despicable Me and Rayman’s
raving rabbids. These quirky creatures are equipped with much more than your
standard plunger. They support the whole arsenal of sound guns to wooden
hammers to bird launchers.
You play as a mad scientists trying to
destroy the minions that once served you. This game relies on a level based
system in which minions spawn from spawn points that can be destroyed. At the
end of the level you are judged by your time, score and amount of minions
killed. When you achieve a perfect 3 stars you will be able to boost the speed,
health and power of your character adding an rpg element to this Fps. 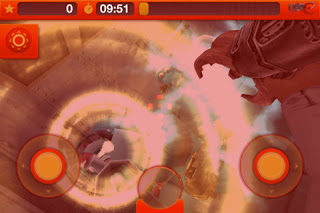 If you are familiar with Archetypes
controls don’t expect anything to change. At all. A dual stick control system
is set along with an auto shoot feature in which you just aim and little tiny
robots in your Idevice fire away. On screen radar shows the minions while UI at
the top shows health, score and time remaining. While no changes to the
controls or UI are apparent, it’s simple, if it ain’t broke, use it in your
next iOS release.
As you blast through 8 levels and
increasing difficulties Villain delivers promises of new levels and guns to wet
your minion killing whistle. As this does not support online multiplayer the
developers focused on delivering a fun, unrealistic, quirky Fps for hardcore
and casual fans of the genre. At 99c this will not burn a hole in your wallet,
but these minions will try to burn a whole in your heart.
Link: http://itunes.apple.com/app/minions/id444404817?mt=8
by Gabriel Ruiz
Posted in: 0.99, 3D, Action, Adventure, Dual Stick Shooters, Games, Iphone games, TheAppShack