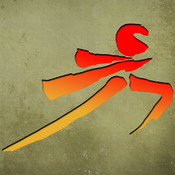 Shoot-em-ups. They’ve grown in popularity quite a bit since the introduction of the AppStore and iDevice. The touch controls make pin-point accuracy and quick movements that would otherwise be impossible as easy as dragging your thumb across a 3.5 inch glass screen. However, the 3D, 3rd Person/On-Rails shooter genre has been basically left out of this Shmup Revolution, with only a couple of titles available for the platform; Wizard Ops, Denizen, Dark Break, ExZeus, TheMars, Battle 3D 2: Iron Punch, and the more open-world type game, Battle 3D: Robots Sky. These titles have provided iOS gamers with countless Space Harrier type entertainment. But sadly, aside from these titles, there’s not others for fans of the genre to sink their teeth into. One-man, Australia-based Justin Hogie obviously knows this, but has still taken a wild chance with his first original iOS title, and created another game we can all add to that extremely short list; Running With Ninjas. 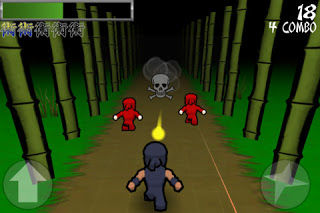 Running With Ninjas is an Endless 3rd Person On-Rails Shooter that puts you in control of a ninja running through the jungle and mountains while being attacked by, and attacking, other ninjas who are bound and determined to take you out. RWN contains one gameplay mode which has you defeating as many ninjas as you can before your health completely runs out. When you start out, you’ll only see 2 different enemies; Red and Green. Red enemies will throw Shurikens straight forward and once defeated, add to your special meter; displayed as writing under your health bar. Green enemies do not attack you, instead, once defeated, they will slightly refill your health bar. As you progress through the world, you’ll soon realize that these are not the only types of enemies. Bosses with strange turtle like shields on their backs, purple enemies that throw Shurikens directly at you, yellow enemies that toss bombs and more will all be after your head, and when all of these different types of enemies are on the screen at the same time, things can get a little hairy. 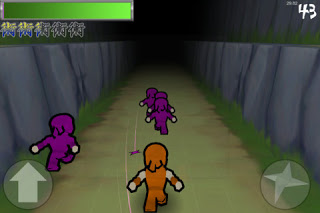 Once you defeat a boss, a scroll appears. These scrolls, once collected, give your ninja special powers, and this is where the special meter comes into play. After you collect a scroll, a special power is unlocked. To use this special power, you’ll need to draw a shape in the middle of the screen. This does take some getting use to, and I still think that buttons up the sides of the screen, or easier swipe gestures, like just swiping left to right, or up and down would have been a better fit, especially since the gestures are a little hard to remember, and can take more than a second or two to pull off, that is, if you can pull it off correctly. Each special power requires a certain amount of power from your special gauge. Once you have enough power, you can draw a certain symbol on the screen, and POW, enemies are in for some trouble. 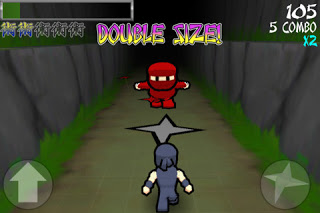 The controls are fairly simple; you’re given a button for jumping, and a button for throwing your own Shuriken. Moving left and right is controlled by tilting your device. Normally, I don’t think I would have checked out a 3rd Person On-Rails Shooter that was tilt controlled, but the controls in Running With Ninjas fit the game extremely well. Also making it feel even better is the great camera control. When you tilt your device, your character moves, but so does the environment. This makes it a lot easier to focus on the gameplay, and not worry so much about where your character is located in the gameplay area. However, if you’re not comfortable with the tilting environment, you can always turn this option off in the settings menu, making the environment stay level as you tilt. I have experienced some issues with the controls, like an occasionally unresponsive jump button, some jitteriness while moving in the air, sometimes resulting in taking damage when I should have avoided a bomb, and some slight sticking of the character while on the edges of the gameplay area. However, these were all occasional, and not game-breaking by any means. 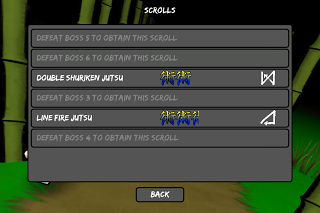 The graphics are pretty minimal, with very little details in the environments and characters, however, this does help to make the bright enemies stick out like a sore thumb, making it easier to focus on them while running at full speed through the environments. The animations are well done, with nice enemy appearance and death animations, cool looking special powers, and nice running animations also add to the feel and polish of the game. 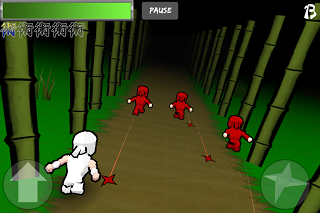 With only one gameplay mode, and some needed tweaks that could make the gameplay a little smoother, not everyone is going to jump on the Running With Ninjas bandwagon. However, if you’re a fan of the genre, and willing to take a chance on a game that has some very solid core gameplay mechanics, for $0.99, you just might be very surprised. In the near future, Justin Hogie has said that GameCenter leaderboards and achievements, as well as possibly another gameplay mode that would revolve around preset challenges and levels, along with some additions to the enemies, stages, and special power scrolls. Hopefully RWN sells well and gets enough attention that these things can be added, because right now, Running With Ninjas shows an extreme amount of promise, and provides some great endless gameplay.