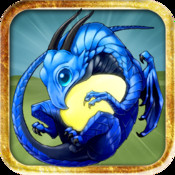 Over the last year, we’ve seen quite a few ‘Pokemon’ like games hit the AppStore; Mighty Monsters, Pocket Summoner, Minimon, MinoMonsters and more, with even more slated for future release. MinoMonsters was a decent Pokemon-esque experience, but with some recent updates has pretty much gone down the drain, and no one else has really nailed the different aspects of gameplay. Well, NNT Resonant (Cats Away [$0.99], iGADGET [$2.99], Berzerk Ball [$0.99], GemCraft [$2.99] and Hex Empire [$0.99]) is now taking a crack at the genre with their new release, Dragon Island Blue. 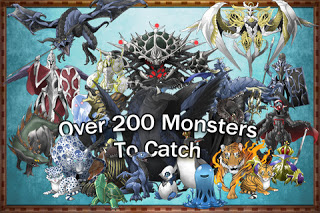 Dragon Island Blue tells the story of a young boy who’s found a dragon egg, which, for a long time, were thought to be extinct. This starts your journey of collecting, battling, evolving, destroying and mixing over 200 different monsters. Starting off, you’re able to pick a element for your dragon; Earth, Wind, Fire or Water. Like NNT Resonant’s previous release, Cats Away, D.I.B. starts off pretty slowly, requiring quite a bit of ‘grinding’ before you actually get into the real meat of the game, but once you do make it through the slow beginning, the game starts to really shine, turning into one of the best Pokemon-type games available for the iOS. 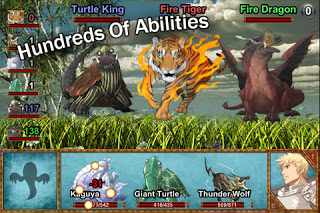 When you start off, you’ll only have access to one area. This area contains a main village, a forest, planes, and a cave. Movement is done by tapping on selected areas of the map, with battles popping up randomly. Once you’re in a battle, you’ll have two different options for control. One, lets you select the attack you want to pull off, and then select which enemy you want to attack, while the other has you swipe over the enemy you want to attack in the direction of the arrow on each attack card.
Depending on which attack you use, you’ll be knocked back in the battle sequence. The battle sequence determines who attacks and when. If you use your regular attack, you’ll be given a lower number, and a higher number for a stronger attack. Each turn that’s made will decrease this number, and once it reaches zero, you’ll be able to attack again. 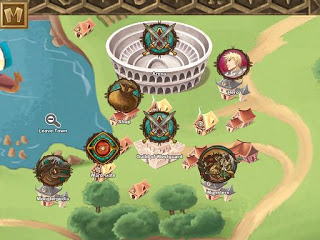 There is a bit of strategy within the battle system, given the battle sequence and various attacks that you can use. But also, when you’re thrown into battle, you’ll face an unknown number of opponents. This plays into how you’ll attack each of the enemies. Up to 3 enemies can be on the screen at once, but in the upper right corner is a number showing you how many back-up enemies will appear once you defeat the starting line-up. Not only do these mechanics play a part in the battles, but also which elements your creatures are. Each element has a strength and weekness; Fire beats Earth, Earth beats Wind, Wind beats Water, Water beats Fire. If you’re up against a bunch of Earth creatures, you’ll want to use your Fire creatures more often because even their regular attacks will be stronger that usual. 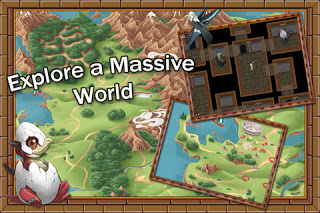 As you battle creatures, you’ll also be able to capture them. This is done by purchasing Bronze, Silver and Gold cards in the town’s shop. Each type of card has their own capture percentage when up against creatures, depending on how strong they are. Once you capture a creature, it’s automatically added to your line-up. As you level your main character up, you’ll be able to hold more and more creatures. However, only the creatures that you use while in battle get the experience gained for each fight, so switching out your creatures is something that you should do regularly, or else you’ll just wind up with 3 decently powered creatures, and the rest of them will be very week, pretty much not helping out your team at all.
If you don’t want to use a creature, once you get back into town, you can destroy that creature, and turn it into a soul stone, which you’re able to attach to another creature. This can be useful, especially if you’ve captured a very low-level creature, or just have duplicates. 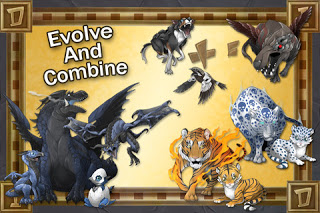 When you level up your character, you’re given a stat point which you can assign to either the defense, attack, magic, resistance, speed or max HP of your creatures. You’re also able to increase the license of your character by battling it out in arenas across the land. After doing this, you’ll be able to attach gems to your character. These gems are available in the shop, or can be won in battle and increase your creatures stats as well. Each license that you earn will add one more slot for a gem. You’re also able to collect totems by completing certain battles. These totems assign a specific creature to your character, able to use a special ability while in battle once each time you leave a town. 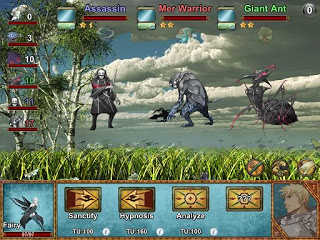 In each town, there are quests you can accept, which reward you with gold and silver, as well as special creatures. Once the quests are explained they go into your quest log. In order to re-read them, all you need to do is tap on the quest again, and you’ll get a full explanation. These quests range from killing or capturing a certain number of creatures to evolving your creatures or taking out a certain creature breeder who’s been causing trouble for the town, and more. There’s a very nice variety within the quests, keeping the gameplay interesting. 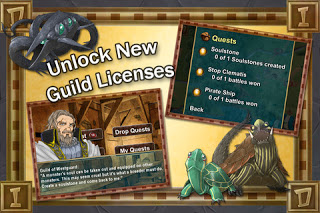 GameCenter is supported, with 3 leaderboards; Collection Percent, Hero Level and Infinite Dungeon, which scores how many levels you can make it through on the endless dungeon. There are also 24 achievements included, which will take some time to complete. Dragon Island Blue contains endless replayability, with the Infinite Dungeon, not to mention the countless hours you’ll be able to spend going through the actual story mode. There is a ton of content in the game, and is easily my favorite Pokemon type game in the AppStore. Right now, NNT is having a launch sale, pricing Dragon Island Blue at $0.99 for a limited time. Soon it’ll shoot up to $2.99. DIB is Unviersal, so no worries about playing in 2X mode on your iPad. If you’re a fan of Pokemon, Dragon Island Blue is a must own game. There’s plenty of depth as well as strategy, and once you get through all the beginning creatures, there are some pretty bad-ass ones you’ll want to try and collect over and over again until you can snag em, building up the best team of creatures that you can.