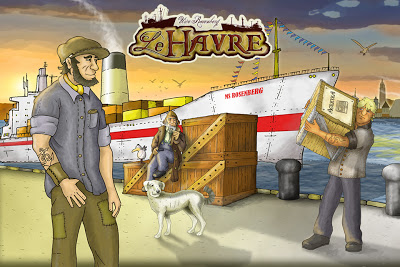 Like Point & Click titles, Board games seem to be a complete fit the iOS device. Perfect for the touch screen UI, multiplayer capabilities and none of the setting up, putting away, or deck/piece/board maintenance. One of the most recent board games to hit the AppStore is Codito Development’s (the same company that brought Tikal, Tigris & Euphrates, Ra and Medici to the iOS) Le Havre (The Harbor). The popular board game, released in 2008, that has you controlling the development of the town, Le Havre. 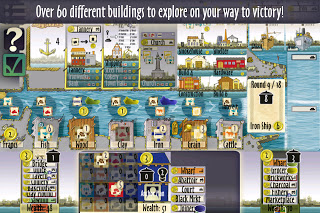 If you’ve never had the pleasure of playing this 2009 International Gamers Award winner, you’re in for a real treat. Le Havre has you building up as much wealth as you can over the course of 18 turns by constructing buildings, owning ships, and bringing in goods through the harbor. The tutorial is very well designed, and easy to understand, giving you the full scope of the game’s mechanics your first time through. There’s also an option to keep hints on while you’re playing, just in case you need a little extra help through your first couple of games. It’s fairly complex, and includes a bit of depth, but once you get the hang of it, it actually becomes pretty simple, and you’ll probably wonder why it took you so long to figure everything out. 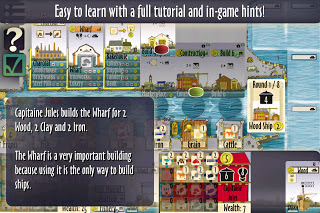 There are two gameplay modes available, Local, which you’re able to set up with up to 4 AI opponents as well as other players via pass n play type gameplay, and Online Multiplayer through GameCenter. You’re able to set these modes up in one of two different ways; Short Game and Long Game. In a short game, you’re given 12 rounds, each round containing 3 turns, and are given a couple of building supplies to get you started. This mode is best for newcomers to the game, while a long game includes 18 rounds, and you are not given any building materials to start out with.
Using your basic building materials; wood, clay and iron, you’ll be able to use the buildings that the town has already built in order to create them. For instance, the town has built the Construction Rirm. You can use the Construction Firm to build up to 3 buildings per turn. Once you build these buildings, you own them. The buildings that you’ll build will help you create more food (which is required every round to feed your workers/employees), more complex building materials, like bricks and iron, and more. Also, with each building you own, your wealth goes up. 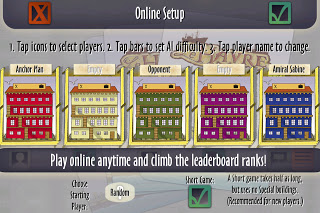 Using the dock, you’re able to collect materials and food, used to feed your workers and build. Starting a long game can take a couple of turns to get into as you collect your materials. You’ll also always need to make sure you take a turn or two to either collect food, or turn food into more processed food, which in-turn feeds more of your workers. Feeding your workers is a huge part of the game. If you can’t afford to feed your workers, you’ll be required to take a very costly loan from the bank, and that can pretty much damage your chances of winning. 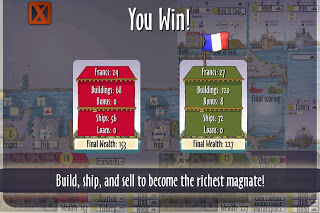 Le Havre is, by far, one of the most impressive board games I’ve had the pleasure of playing on the iOS. The graphics, user interface, and just the mechanics of it all create an incredibly immersive, and very entertaining gameplay experience. Priced at $4.99 and being Universal, if you’re a fan of board games, Le Havre is one that you need to own. GameCenter leaderboards for wins, total wealth, and more, it’s one game that will take you a while to master, but is incredibly enjoyable throughout the entire learning process, and even more-so after you finally figure out the best ways to become the wealthiest man in all of Le Havre. Codito Development just can’t seem to do any wrong.

Board games are slowly but surely finding a nice, comfortable home within the AppStore. Classics like Monopoly, Life, Scrabble, Clue and loads more, along with not so well known games like Tigris & Euphrates, Catan, Tikal and others are winding up on iDevices, finding new fans, bringing back great memories and creating enjoyable family time without having to deal with setting everything up, cleaning up, or worrying about ‘misinterpreting the rules’ (damn Patriots). Now, another game that’s new to me, but that some of you guys/gals might remember from your childhood, is Scotland Yard. The original publishers of the game in Canada and Germany, Ravensburger (who’s also released FiTS, Ramses II and more on the iOS), is responsible for bringing Scotland Yard to the AppStore. 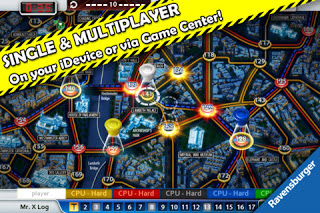 For those of you, like me, who aren’t familiar with the game, it’s a simple premise. You either play as Mr. X, who is running from Scotland Yard, or as Scotland Yard, who is chasing down Mr. X.  The board is made up of different stations, each linked together by colored lines. These colored lines show the means of travel between each of the stations. Taxi’s are yellow, busses are red, and the subway is blue. You’re given a certain number of tickets for each of the different means of travel, and use them to move about the city.
Mr. X does have a couple of advantages. He is hidden from the Scotland Yard pawns, except for on specific turns, when the other players will be able to see where Mr. X is. The game shows you what means of travel Mr. X is using, and the police will have to use that to try and track him down. However, Mr. X is also given a certain number of invisible tickets, which let him travel without the game showing the police is he’s on the bus, a taxi, or the subway. He also has a couple of double moves, which let him move twice in one turn. Along with those perks, Mr. X can also travel in the water if he hits certain spots next to the river. Combining all of these special abilities will be necessary to escape Scotland Yard.
As you can imagine, Scotland Yard is set up perfectly for online multiplayer games, and it is included. Async multiplayer via GameCenter along with Wifi/Bluetooth modes are available. You can also play with more than one player on one device. There is also solo local play with Easy, Normal and Hard difficulties. 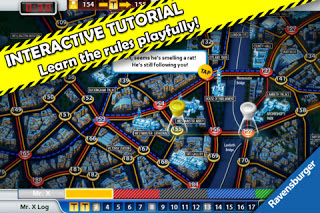 With Scotland Yard being Universal, and with all of the multiplayer modes, the price-tag of $5 is very fair, especially when the original physical board game can costs anywhere between $25 and $40, and involves all of the setting up, clean up, and trying to find players who can sit around the board with you. Adding to the gameplay and replay value are 15 GameCenter achievements, some of which will require some very skillful gameplay. So you can add Scotland Yard to the list of board games that play fantastically on the iDevice, and cost a fraction of the price of the physical versions. The enhanced graphics, easy to learn gameplay, and high replayability make it a game that has the chance of staying on your device for as long as you own it. Also, being released by Ravensburger and FDG (Clear Vision, Cover Orange, Blueprint, Beyond Ynth, Tentacle Wars, and more) – you can be sure that it’s a high quality game, and that if any problems arise, they will be dealt with ASAP. Scotland Yard is highly recommended if you’re a fan of the genre, or if you’re looking for a game that the whole family can play.