The latest iPhone 7 might not have been released yet, but surprisingly we have already found rumors for the iPhone 8 by watching what Apple has ordered. With this information and various leaks, we can get a fair idea of what to expect with the 2017 iPhone release. The new phone is expected to be one of the most impressive and also feature the biggest changes when it comes to design, features, and just about everything else since it would be iPhones 10th anniversary.

The iPhone 7 has already made a huge impression with its leaks and what’s expected, but ultimately we don’t expect a major change when looking at the iPhone 6S. By the looks of it, the phone will have some minor tweaks that are sure to improve it and make it a lot more impressive, but the design itself remains about the same as it is now. 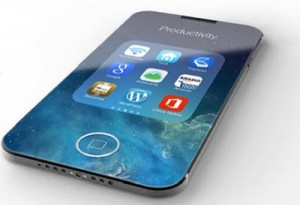 The iPhone 8, however, is sure to impress on a whole new level. Many were hoping Apple will include a curved display with the iPhone 7, which doesn’t seem to be an optional all, but Apple has been working on curved screens and cases, meaning the iPhone 8 is sure to have a curve some kind. An almost oval design has been thought of, but we are expecting a similar design to the current Samsung S7 Edge.

The iPhone 8 will also once again feature a glass back much like we saw on the earlier iPhone such as the 4 and 5. Apple will make this glass a lot stronger, and the back will also feature some kind of curve, which is sure to give the phone an amazing look.

Apple is sure to change the home button, which will eliminate the need for so much wasted space below the screen. The button will become part of the screen and also feature 3D Touch. However, there are also rumors that the iPhone 7 will feature similar technology. The button will still feature 2 options, such as a soft press for home and hard press to see other open apps. It could also include more options such as shortcuts.

Since the home button will no longer take up that much space, the company can include bigger screens. The 2017 and 2018 iPhone is expected to have a wider and longer screen, taking it up to 5.8 inches. This won’t make the device much bigger as less of the case will be shown, and the screen will be curved as mentioned above. The current 1920x1080p will also be upgraded to 1920x1310p. The best part about the display is that Apple has order OLED screen which has true black coloring. The screen has the ability to switch off some LED’s, which also saves battery life. The only reason they won’t be switching to OLED with the iPhone 7 is because these screens have a higher burnout rate, meaning they don’t last as long. Since the screen will be featured on the iPhone 8, it gives the technology time to become more refined.

The iPhone 8 will also feature Gorilla glass 5, which is currently the most durable glass for a mobile phone. There have been many tests around this glass, and it’s been highly impressive. This will ensure your phone stays safe, and your display doesn’t scratch or crack for just anything. So far, the tests have shown that it can withstand drops onto concrete from 1.5m, which is way beyond anything of today. The gorilla glass 5 will also be featured on both the front and back of the phone.

This is actually an aspect that Apple has been working on for a while. We might see some of it with the iPhone 7, but will definitely be perfected on the iPhone 8. There are 2 ways this could work, firstly, they could include an accessory that simply needs to place your phone and the device and it will charge without the need of a cable. However, the second option is the most impressive. Apple has been working on a similar concept as mentioned above but also includes charging while the device is near the device, but not actually touching.