IGT released their latest dazzling new video slot Apollo Rising, this month and it certainly rose to the occasion with 5 reels stacked 8 rows high and 100 pay-lines offering a multitude of ways to win on this celestial being, players soaring beyond the stratosphere with massive pay-outs propelled to new heights. Any video slot offering a 100 paylines stacked 8 rows high, while still offering smooth, glitch free play and planet shaking animations must be just a bit special to offer the cutting edge math engine technology to make such a feat possible. 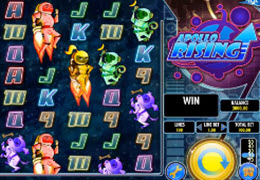 This slot is similar to their other, very popular Wolf Rising video slot both available on desktop or mobile handsets and that says a lot. Making this mammoth reel-set playable from any mobile device is a fait accompli, especially if the blazingly fast graphics and fantastic animations becomes part of the equation as well. With its launch of the new Stickers slot, both NetEnt and IGT launched new slots on the same day, by chance, we wonder, with both offering wilds that reward with free spins, re-spins and stays sticky till the reels run out of new wilds?!

Similar in special feature play, but maybe a bit more exciting on the large reel-set, find that too busy or confusing well then the simpler play in the serene atmosphere of a smaller reel-set would be preferable, spoilt for choice on two similar games that couldn’t be further apart.

How quickly time passes when you enjoy yourself on NetEnt slots, players just enjoyed Stickers for the first time and it’s already time to start looking at their new upcoming June release and they spoilt us with a look slightly further into their future releases.

More good news in future all slots will instantly be available on both Touch mobile and desktop platforms, so no more waiting just Touch and it’s on your mobile, phone or tablet, iOS or Android, the choice is yours, instantly. Even more good news for mobile players, Stickers will be their last Flash based slot, all future NetEnt titles will now be in HTML5. Therefore, no more unwilling Adobe Flash support, downloads or updates will be required or searching for alternative compatibility, as always any HTML5 content is accessible directly from your browser. 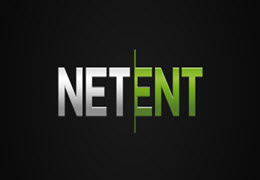 Without further ado this month on June the 24th the new Neon Staxx slot is due for consumption on a grand scale, offering exhilarating stacked wilds and bonus rounds with a number of other features that they are still rightfully tight-lipped about. Then in July on the 23rd there will be a new form of Sparks with shootings stars, and maybe even a Catherine wheel fireworks feature and neato Sparkler spins.

Even further into the crystal ball, on the 24th of August they will Dazzle Me with yet another wondrous video slot, called Dazzle Me filled with bright brilliantly clear dazzling diamonds, where the animations offer a prism of bright, variegated colours and more dazzling visual effects.

By now we’re looking so far into the future the crystal ball is hazy, but still clear enough on September the 23rd you will be carried off by Hook’s Heroes, where Peter Pan will be battling Captain Hook with all his might.

Quickspin recently blew away players on mobile with their latest released game called Jewel Blast. The explosive video slot is a jewel bound to fascinate all mobile users with its simplistic symbols. The Swedish developer believes that the intensely coloured slot will appeal to a large market with its easy to understand game-play and excite with added bonus features to enhance entertaining play.

Jewel Blast entertains on 25 paylines across 5 reels, featuring win enhancing bonus boosters, which include a bonus game, scatters, re-spins and staked wilds. Jewel Blast offers a sparkling display with all symbols captured within bubbles ready to burst into winning combinations. 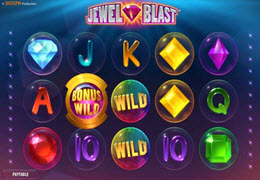 Quickspin revealed they are currently developing a new game called Illuminous, the game commits to be true to the bright meaning of the title. The game promises to be astonishing, with outstanding animations, presenting a re-spin feature that initiates two or more reels with about 50% wilds on the reel strips. The game includes free spins with at least three of the reels offering extra wilds, at the time of writing the developer offered no official launch date.

Black Magic Fruits, a new video slot freshly released by Scientific Games Interactive, and SkillOnNet announced their intention to be the first in launching this new mobile slot, they are a sister division of Scientific Games that became popular via their various casino operators. The new slot is already live on several popular online casinos.

This current launch of the Black magic Fruits mobile game serves as proof of the continuing growth in, and demands for more and improved mobile casinos and products during the past year. It was the first ever launch of a mobile casino product, by the SkillOnNet group of casinos, during any mobile product’s early release window. 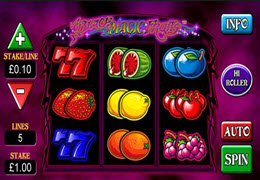 SkillOnNet, Senior Mobile Product Manager, Mark Green, commented that the colourful mobile slot will first be available first at their casino group, and they feel honoured to be chosen by Scientific Games as the first to the market with their exciting new product. It is a great reward for their huge leaps & bounds made with their mobile software offering, which currently makes up a significant slice of SkillOnNet’s revenue income. As they continue to develop additional inherent mobile software promotions and features, some of the countries exceed their wildest expectations.

Black Magic Fruits require players to unlock the power within these mysterious wild 7s in an exclusive 3reel 5 pay-line slot title, featuring a new Big Bet feature and while playing in this mode, a Red 7 symbol depicts the wild, also substituting all other reel symbols.

SkillOnNet is a top software provider in the on-line casino gaming industry, by using innovative design and graphics together with their proprietary back-end structures and their superb development team, they power several of the world’s largest on-line gaming operators for desktop and mobiles.