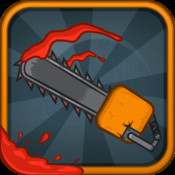 I am constantly amazed by iOS games. Whenever I even so much as start to think that there’s nowhere else for games to go, WHAM. I find myself in the midst of an original and unique type of game that I’ve yet to see in the AppStore, and it’s almost always by an indie developer I’ve never heard of prior to that release. Well, here it is again, another awesome surprise from a new-to-the-iOS-scene, Spencer Cordes first foray into the AppStore, Tread of the Dead. Ready for another surprise? It’s a zombie game. Yeah, that’s not the surprise. It’s a zombie game, and I’m not sitting here wishing it wasn’t. SURPRISE.
Tread of the Dead is a tilt-based survival game that focuses more on quick thinking and puzzle solving than actual zombie killing and survival. Each stage gives you 3 different weapons to fling at the oncoming zombies, and your goal is to guide these weapons into the various patterns of zombies, slicing each of them in half before you run out of your available gear. 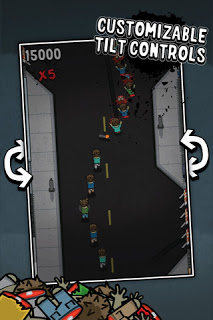 Starting off, you’re only given chainsaws, which are able to take care of the first patterns, and usually in one go, but as you progress through the game, and the zombie’s patterns get more complex, some swift and skillful tilting will be required in order to destroy all of the zombies. Then you’re given another weapon. Shuriken. These nifty little ninja stars are able to either stay locked together as one zombie killing weapon, or split up into 3 equally separated stars preformed by tapping anywhere on the screen. Pulling this off just right can slice up tightly nit zombies while transforming from one to three stars, but only if timed just right. As you progress even further, you’ll unlock pipe bombs, zombies with bombs strapped to their chests, direction changing machetes and more will help you take out the crazy amount of zombies in even crazier patterns as well as some incredibly tough boss battles. Another fantastic thing that’s been thrown in for good measure is the between-worlds ride where you’ll get a environment specific vehicle to mow down road fairing zombies as you move on to your next location. 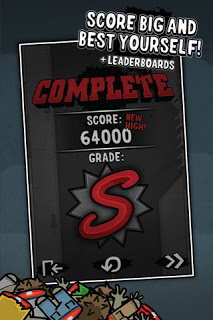 As if that weren’t enough, Tread of the Dead also contains 4 additional gameplay modes, with one being unlocked every time you complete a world in Adventure Mode. These 4 additional modes? Arcade, where you’ll be armed with a never-ending supply of chainsaws to take out an endless amount of zombies. Once a zombie reaches you, it’s game over. Infinisaw lets you tilt a never stopping chainsaw into an endless mass of zombies as a timer runs down. Here, for each large combo you get, more time will be added to the timer. Once it runs out, that’s it. There’s also Vehicular Mode, which lets you chase down zombies while avoiding objects. Gas is given to you for building up large combos, and once you run out of gas, game over. The last mode is Zombified, where you get to take control of a zombie, and play an endless distance game, avoiding all of the objects that come flying your way. 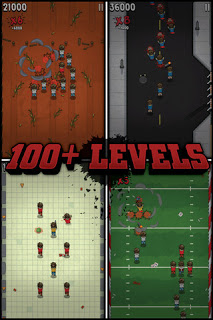 The graphics and animations are well done, though they are reminiscent of many other Doodle games, they aren’t really cheap looking, but graphics are not this game’s strong suit. However, the animations are great, with nice deaths and cheesy explosions, it’s hard not to laugh, and be drawn into the gameplay even more. GameCenter integration is also included, with leaderboards for each of the Adventure Mode’s 4 Worlds, your Total Adventure Mode Score, and for each of the 4 other gameplay modes as well as 38 great achievements. Tread of the Dead also contains a great in-game stat section where you can check out loads of different stats, and a skin menu, where you can change the colors of all of your weapons once you kill a certain amount of zombies, giving the game even more added replay value. 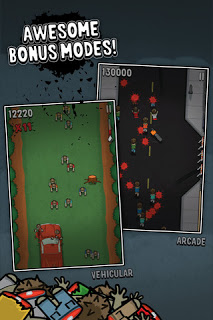 Priced at $0.99, being Universal, and with the incredible amount of content, as well as the crazy high replay value, Tread of the Dead is a great buy. Developer Spencer Cordes has also stated that more content is on the way, as well as touch screen controls so that iPad gamers won’t have to deal with the sore wrists that come with tilting your device for long periods of time. There’s also a lite version if you’re still on the fence after reading this, and checking out the trailer. I, for one, definitely hope to see more games come out of Mr. Cordes head. There’s obviously some incredibly good ideas bouncing around up there.