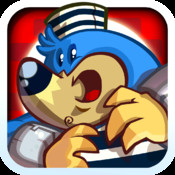 Grumpyface Studios is easily one of my favorite dev teams working on iOS games today. Their previous games, Robot Unicorn Attack, Wispin and Bring Me Sandwiches! are some of the most unique and original titles within their respective genres, and are 3 games that I will NEVER delete from my iDevice. Well, last night, Grumpyface released another title, again, published by Adult Swim, who really can’t seem to do any wrong these days, called Super Mole Escape, an Endless Digger game that has you controlling a mole digging through layers and layers of the earth, trying to escape the fuzz. 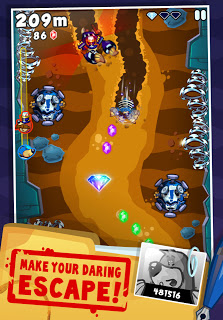 Super Mole Escape  has two separate modes; Single Player and Versus. In Single Player Mode, you’re able to choose between two different moles when you start out, a male and a female, both with different stats; The male has equal Speed, Acceleration and Strength, while the female has less Strength and boosted Acceleration. There are also 5 other moles which you’ll be able to unlock as you gain gems while playing the game. In Verses Mode, you’re able to match up either randomly, or with select friends through GameCenter to play side by side. Both modes are essentially the same; control your mole while trying to reach the furthest distance you can before being caught by the police. Once you are caught by the police, you’re given an option to bribe the judge for 1,000 gems, or take your chance and spin the wheel, where you can either earn extra gems, get a second chance, or get boosters for your next game. In Verses Mode, whoever is caught first looses. There are no second chances given in Verses Mode. 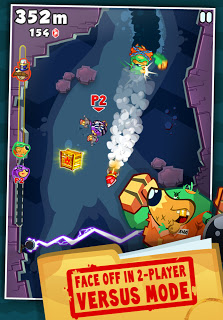 Aside from the Versus Mode, where the game really shines is in it’s gameplay mechanics. Endless diving games are certainly nothing new within the AppStore, but Super Mole Escape happens to very gracefully out-shine all of them. As you make your way through various environments of the ground below, you’ll be able to collect gems and power-ups. The gems play two rolls in the game; One, collect them to unlock more moles, upgrade your mole’s stats and purchase one-time-use boosters in the shop. Two, to boost. Every time you collect a whole string of gems, your mole will get a speed boost. The more strings you collect, the faster your mole will go, each string giving them an even stronger boost of speed. You’re also able to plow through rocks, enemies and some hazards, which would normally severely slow you down, in the blink of an eye, opening up more power-ups, gems, and special gems to collect. Special Gems are scattered throughout the game. Big and shiny, they’re very hard to miss, but are usually placed in spots that require quick thinking, or a boost of speed in order to collect. But once you collect 3 of them, you’ll get a special Super Boost, which will throw you far ahead of the cop, or your opponent, if you’re playing in Versus Mode. 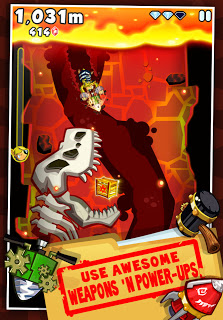 There are multiple power-ups to collect as you make your way through the ground; Hammers, which can smash through rocks, as well as smash enemies that have a mission to slow you down, Diggers, which you can ride for a very nice speed boost, plowing through most everything in your path, Rockets, which you can shoot at your enemies, blast through walls with, or shoot at your opponent if playing Versus Mode, Shields, which allow you to take 2 hits without slowing you down, and a Magnet, which draws gems to you. These power-ups are scattered throughout the world in crates. To break them open, you simply need to dig through them. Once you do, an icon with the power-up you’ve collected will sit at either the bottom or the side of the screen (depending on your control scheme), able for use whenever you’re ready. 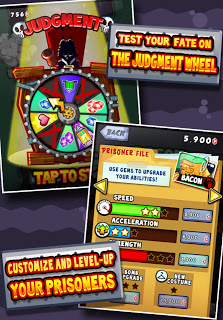 Other than rocks, loads of hazards will try and slow you down as you try and escape. Mushrooms which bounce you back a bit, dinosaur skeletons which will chomp down on you, worms, Eskimos, hot lava, spikes, flash freeze devices, and more, will all try and throw a wrench in your escape plans. As you progress, and get deeper and deeper, the hazards become more abundant, and packed together, making the game more and more challenging the further you dig. The separate environments each house their own hazards, and this variety really keeps the game fresh, as you never know which environment is going to come next, or what is around the next set of rocks.
There are two control schemes; Tilt and Touch. Tilt is pretty self-explanatory, while the Touch Controls let you drag your finger anywhere on the screen to move your mole. Both control options have sensitivity settings, which really helps out, especially when using the Touch Controls on an iPad. It’s great being able to pick your choice of controls, and set it to be as tight or loose as you like so that you can play the game to the best of your abilities. 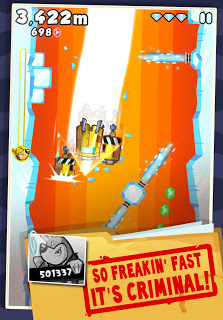 Priced at $0.99, being Universal, containing GameCenter leaderboards for Furthest Distance, Total Distance, and most Verses Games Won, as well as having 22 hard to unlock achievements, and 35 in-game objectives which you can do to earn extra gems. There are IAPs, but you can unlock and upgrade everything without purchasing any additional gems, but they are there if you would like to unlock everything right away, or show some extra support to the developers. Grumpyface has made an extremely solid Endless Diving game, one that definitely leaves the rest of the genre in the dust, and sets a new standard for future Endless Diving games to follow.