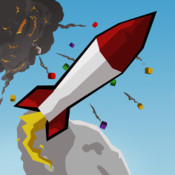 We’ve said before that we absolutely love just about all of the ports that have found their way to the AppStore. One of them that happened to slip under our reviewing radar was released back in 2009 on XBLA. After making its way to Windows Phone 7, it was eventually ported over to the iOS late last year. Getting an 8.5 on IGN, as well as being an Editor’s Choice, and receiving an 80% on Game Rankings, I was really excited when I first saw the trailer, after hearing that it was coming to the AppStore. Rocket Riot, developed by Codeglue, a Dutch development company who had previously released titles for the Pocket PC, J2ME (Java 2 Micro Edition), Nokia, generic Smartphones, as well as previous iOS titles, had also had their hands in Toki Tori, the fantastic puzzle platformer, and had a good 8 years of game development under their belts at the time (now, almost 10). 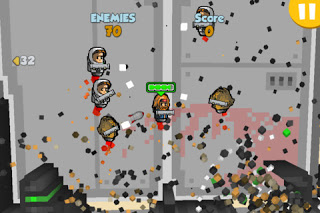 Published by Chillingo, Rocket Riot got quite a bit of attention, but still remains a sort of hidden gem of the AppStore, with it’s best position on the AppStore charts at #16, in the Neatherlands, and then fading away into the backlog of lost and forgotten iOS games about a month after it’s release.
Not to say that Rocket Riot is a game that’s worth forgetting. It was released mid-November of 2011, basically right before the craziness of the December AppStore, when just about every game went on sale, and developers scurried to get their games released before the 2 week shut-down Apple has at the end of the year. Unless you’re a major company and have a game that’s extremely hyped up, chances are your game is going to basically tank if you release it around this time. 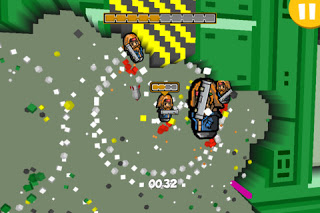 Now, to the game. Rocket Riot is a sort of dual-stick shooter that’s built up like a sort of arena-type platformer (along the lines of Scorched Monster, BlibBlob, Bloo Kid, and to a lesser extent, Super Crate Box, Muffin Knight and Spellsword). You’ll control one of hundreds of available characters, which you can unlock as you progress throughout the game, as you chase after the evil pirate Blockbeard. The controls might take a little getting use to, with a sort of invisible joystick for movement on the left side of the screen, and an invisible tap-n-drag control for shooting your projectiles on the right. Firing works very well, however, being able to swipe frantically in the direction you want to shoot your missile launcher feels natural, and is a perfect fit for the game. 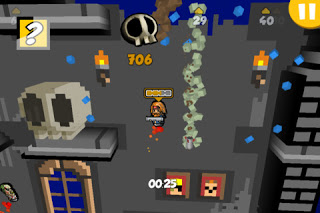 There are two other control schemes available, with the joystick option, you still need to drag on the left side of the screen to move, but to fire, you can just hold down on the screen, moving the joystick to the right around to auto-fire in that direction. The last control scheme uses the iDevice’s tilt option to move, while utilizing the default swipe to shoot controls for firing your weapon. The controls do work well enough, though I would have preferred an actual static joystick for movement.
There’s 48 story mode levels, each with their own completion objectives, usually just killing a set amount of enemies that randomly appear throughout the stage, but also thrown into the mix are levels that have you find a football, and bring it back to the uprights at the other end of the stage, given objects which you’ll need to destroy before being taken out by the level’s enemies, boss battles, and more, making for a nice variety of gameplay throughout the campaign. Also included is an Extra Levels Mode, which contains 6 especially challenging stages with either ‘kill every enemy’ or ‘destroy this object’ objectives. 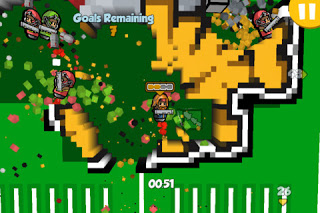 As you start blasting away at the environments, which are all completely destructible, various power-up boxes will appear randomly, before the environment starts rebuilding itself. These items can either boost up your shot, change your shot, give you extra defense, or be a total pain in the butt. Ranging from super big missiles, to shooting various sports balls and from missiles that drop straight down to a ‘bang’ flag that does absolutely no damage at all, and more, learning what boxes to pick up and which ones to avoid is extremely important, especially when trying to ‘3 Rocket’ (rockets are in place of stars for the level rankings, dependant on how long it takes you, how many shots you fire and how much of the environment you destroy) each stage.
The graphics stand out as being a highlight of the game. 8-bit stylized pixels are put together in a 2.5D-like environment, with a modern look. It’s something I’ve yet to see done in an iOS game, or any other console game for that matter. The animations for explosions fill the screen with small pixels, making for some very hectic feeling gameplay. The music and sound effects also add to this quite a bit, giving the game a great arcade look and feel. 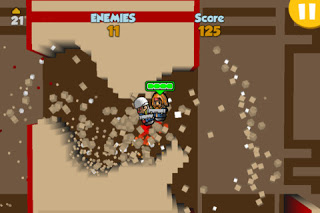 GameCenter is supported, including 9 separate leader boards; Total Points, Pirate Levels, Warehouse Levels, Army Levels, Chips Levels, Mansion Levels, Lab Levels, Space Levels and Bonus Levels, along with 12 achievements, which will take even the most hardcore gamers quite a while to unlock (Shoot every type of enemy at least once, shoot 20 enemies in 60 seconds, get 50 long shots, destroy 1,000,000 blocks and more). With it’s content, polish, and the incredibly entertaining gameplay, it feels perfectly priced at $2.99. Being Universal helps out with that as well. Granted, it is a Chillingo publication, and from the long period of games that haven’t been updated since their release, it’s still a great game, with no bugs that I’ve come across, and basically endless replay value, especially if you want to try and better your times in the extra levels, or compete for better scores on the leaderboards. Rocket Riot is definitely a hidden gem that you’ll want to snag if you’re a fan of Dual-Stick Shooters, Arcade/Arena Score Chasing titles, or a fan of XBLA ports (I know you’re out there! I’m one of you…).