Cubes Vs. Spheres, the second iOS release of ShockPanda Games, hit the AppStore August 18th of last year. Since then, it’s gone through only two updates, but those two updates added quite a bit to the game. 3 endless survival levels and an extra difficulty, insane, filled with 10 new levels. Each stage offers up a challenge to get a perfect, or star, rating, done by hitting a certain score, and not taking any damage throughout the stage. The endless levels also add quite a bit of replay value, and that’s why it can still be found on both my iPod, and my iPad to this day. The core gameplay is so incredibly fun, that even though all you’re doing is blowing up boxes with spheres, I find myself playing it for hours on end. It’s definitely one title that everyone should check out.
**Note: This review was written after playing Version 1.0.
–Click here to check out the original review– 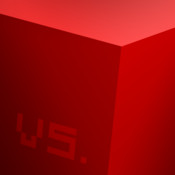 Cubes Vs. Spheres is a new 3D physics attack game by ShockPanda Games, creators of Space Bunnies, a personal favorite of mine. In it, you’re job is to fling spheres into cubes, protecting the circled area around your sphere chute. You’re given 30 levels, 10 in each difficulty of Easy, Medium, and Hard. The goal is to blow up cubes as they make their way towards you using different spheres that you can buy in the between levels shop; trying to produce huge combos by hitting cubes with bits and pieces of cubes that your spheres smack into and getting 3 stars, and a P, for “Perfect”, by not letting the cubes hit your area that‘s marked off within a circle. 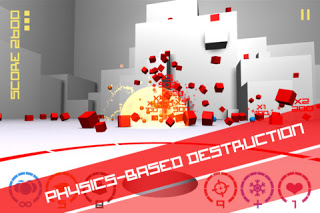 The game’s graphics are very minimal, but this makes it so that the engine can handle huge waves of cubes coming at you. The minimal graphics work so well, and look so polished, that it’s hard not to see how impressive they are while you’re playing. The level designs are great, and the structures in which the cubes come off of, and out of once they come towards you get more and more impressive as the move on. I found myself just scrolling around the levels sometimes checking out the structures, not paying attention to the cubes, and ended up with huge waves of them coming at me. It’s really a great looking game. 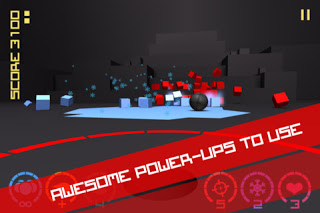 You’re given 6 different spheres, that come out of a chute inside of your area. They are selectable at the bottom of the screen, and do not appear until you decide which sphere you want to fling at the cubes. There’s your regular sphere, which you can upgrade to split into 3 and 5 other spheres by tapping on the screen after you fling it at cubes, a fire sphere that explodes on impact into about 8 smaller spheres, a big black sphere that squashes cubes, and can smash through them, hitting cubes behind it, a sphere that locks on to the closest cube to your area, a freeze sphere that slows down cubes, and a decoy that draws cubes to it, exploding after a certain amount of time. You end up unlocking these with credits earned throughout the game, and need to keep buying them in order to use them. This isn’t a real problem though, because you’ll earn enough credits in each level for about 15 different spheres or more, and helps add to the strategic side of the game. 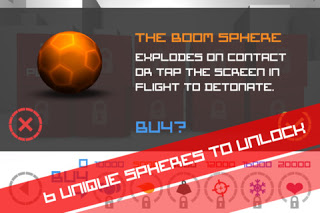 There are only 3 different cube enemies in the game. Red cubes, which you will see a lot of, black cubes, which are mixed in with the red cubes, and are more powerful, and harder to destroy, and sometimes cubes that are almost invisible. There are not very many of the invisible cubes throughout the game, but you will be checking the sides of each level just to make sure you know when they’re there or not. It would have been nice having more types of enemies, maybe enemies that are immune to some of your power-up spheres. Seeing a flaming cube that could melt your freeze spheres ice, or an assassin cube that could take out your decoy would have been awesome. But with the three enemies in the game, you get enough variety to keep you busy, and with the cubes moving differently each time you play the levels, you’ll never have the exact same experience twice. This randomized intelligent movement is great, and coupled with the GameCenter leaderboards, 3 star and P rankings, and achivements, add immensely to the replayability of the game. 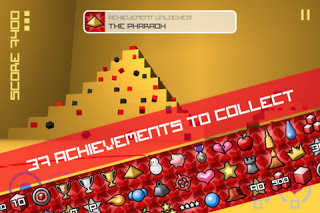 The physics in a game like this are very important, and ShockPanda Games has done an amazing job getting it just right. Seeing each cube explode when it’s hit with a sphere or bits of an exploding cube is awesome, and really nice eye candy and the spheres feel like they actually have some weight to them. The music in Cubes Vs. Spheres is fitting, minimal but kind of catchy, and fits with the atmosphere, but the effects for throwing spheres and hearing them bounce kind of made them sound like hippity hops that were filled to the extreme, and about to blow up. You are given two control schemes, one is tilt to turn, and the other is swipe to turn. Both work very well for this type of game, but there were a couple of times the screen would end up shooting upwards when I tried to fling my ball forward using the swipe controls. Not often, but it did happen. 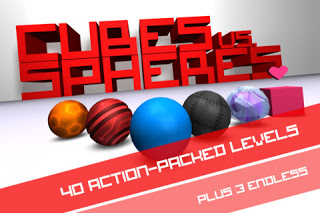 I’m giving Cubes Vs. Spheres 4.5 out of 5 stars, because even with it only having 3 different enemies, and experiencing a cube getting stuck way in the back of a level, unreachable, and having to replay that level, it’s an awesome game. Very well made, very polished, challenging, and a blast to play. The replayabilty is off the charts, and it’s one game that will never leave my device. For $0.99, including retina display, and being Universal, it’s a great deal. ShockPanda has definitely put a lot of time and effort into this game, and with them taking part in the Touch Arcade thread, I have no doubt that this game will get even better with only a few updates.