Shmups have really seemed to expand outwards and spawn some new and interesting genres, especially since the introduction of the AppStore. Dodging games like FlipShip, Tilt To Live and Silverfish; Dual-Stick exploration like Isotope and Inferno; Survival games like ElectroMaster, even the endless genre has been touched resulting in games like Hypership Out Of Control and the wave-based Enborn-X.
Taking a page out of ElectroMaster’s book, and expanding even more on it, 2dgames.jp has recently released their bullet hell survival/dodger, Tameuchi. 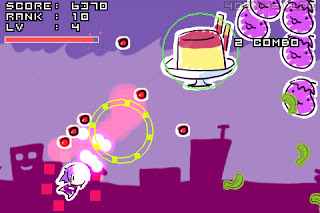 Tameuchi is a bit strange, well, it’s not very surprising that it’s a bit strange, it’s created by Japanese developers who obviously have a taste for the cute and out of the box thinking. You control a little girl up against wave after wave of purple jelly looking creatures, milkboxes, pudding, and more who all seem to have a wide array of bullets and projectiles all ready to take you out. The good news is, you’ve got an endless supply of bullets, can fly, have proper shielding, can level up, and are able to regain health by collecting bananas. 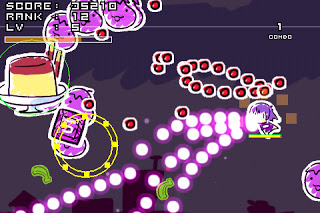 The controls, like most iOS games, are fairly simple. To move, you just need to touch down anywhere on the screen, and drag your finger in the direction you’d like to move. While you’re doing this, you’ll be charging up your bullets. Once you let your finger off of the screen, your bullets will be released, and the carnage will begin.
As you collect green and yellow bananas, your projectile charge bar, and health will be regenerated, you’ll also be able to level up as you progress throughout the game, killing everything in sight. Once you level up, your charge gauge will get bigger, and your projectiles will get stronger, being able to take out more and more of the ever increasing onslaught of enemies. As your rank goes up, the enemies will get stronger, and more of them will attack you all at once. Their bullet patterns will also get more complex. What really helps out, is that while you’re charging your bullets, you’re able to suck up some of the smaller bullets with your charge shield. However, you can only absorb a certain amount before you wind up taking damage. Also working in your favor, once you defeat the milk carton, or pudding, all of the bullets on the screen turn into collectible bananas. 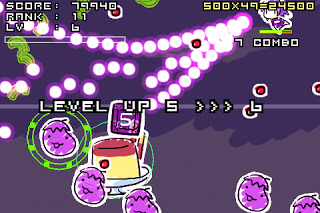 Priced at $0.99, it’s a fantastic game to pick up if you’re a fan of the slightly weird Japanese gaming culture, or are into dodging/bullet hell titles. The only bad things I can say about the game is that there is only one game mode, it’s not Universal, though, the game still looks great in 2X mode, and there’s absolutely no leaderboards. That’s right, not even local boards, it does save your highest score, which is a plus, but nothing else. GameCenter integration, as well as more modes would make Tameuchi one hell of a game. But for 2dgames.jp first at bat within the AppStore, they’ve hit, at the very least, an inside-the-park homerun.
If you’re interested in the game, but don’t know whether or not to take the plunge, check out Tameuchi Lite.
****After writing this review, I contacted the developer and asked if GameCenter would be added in a future update, they said that yes, it would be, and asked us to be patient. =o)
So those of you holding off on the game because the lack of it, it will be implemented in the future. *****