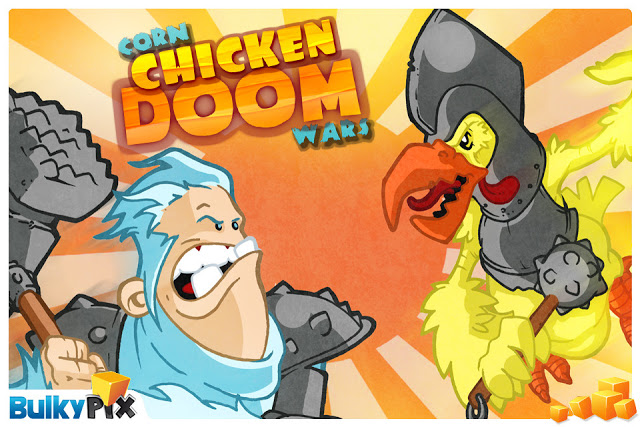 Tower+Base Defense games are everywhere in the AppStore. It’s definitely a genre that has been overwhelmed with releases. With the growing capabilities of the iOS hardware as well as it’s software, this genre is finally expanding after a sort of dead period where nothing really new was hitting the gaming scene, and 3D Tower Defense titles seem to be gaining ground. The most recent TD release from the very prominent publishers over at Bulkypix is Chicken Doom. A tap-based 3D Base Defense title that has you defending a chicken in a lookout tower armed with a Gatling gun. 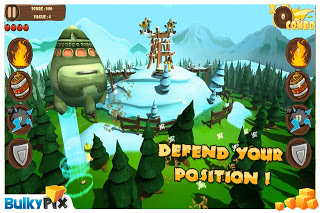 Chicken Doom has you playing through various environments on Easy, Medium, and Hard difficulties. Your chicken sits at the top of the screen, back in the stage a bit, while enemies come at you, appearing from the bottom of the screen. The controls are simple; Tap on an enemy to fire at them. You can also hold down on the screen to constantly fire, but this knocks out any chance of building up a combo multiplier, seriously effecting your score.
So long as you can hit enemies consecutively, without missing one or having too long of a break between hits, you’ll build up your combo, which, in-turn, seriously helps build up your score. The higher your score, the more currency, labeled as ‘Corn’, you’ll earn. Helping out with this is certain power-ups. You’ll be able to use these to increase your combo by picking up an individual enemy, and hitting them about 10 times. During this period, the action freezes, and the one enemy is the only enemy on the screen. 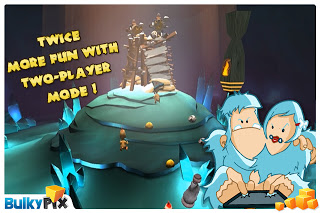 You’re also able to purchase and upgrade power-ups in the store. Here, you can equip up to 4 power-ups, from a TNT Barrel, which rolls down the hill, flattening all the chickens in it’s path, a Bugger power-up, which covers the chickens in goo, and slows them down, a Chicken Bomb, which burns all surrounding chickens, and more. You are able to upgrade these as well, making them stronger and stronger as you progress through the game. Items will also be unlocked as you reach achievements within the game. A huge plus here is that there are no IAPs, so the game isn’t incredibly difficult just to push you towards throwing more money at the developers. Not to say that the game is easy. It’s not. 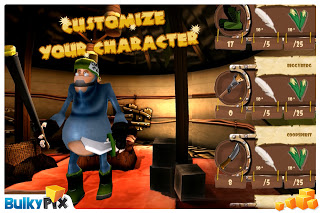 With each of the 6 stages having 3 difficulties, Medium and Hard will offer up quite a battle. You should definitely expect to spend quite a bit of time on these, and be ready to play them more than just a couple times before you complete them, especially in the later environments, which are unlocked after you complete the beginning levels.
What really makes the game stand out is the Co-op Mode. You’re able to play every level with another player on the same device. Unfortunately, it does not support online co-op gameplay, which definitely would have made this one of the best base defense titles available in the AppStore. But it does add an extra level of fun as well as strategy to the game, which is fantastic to see within the genre. 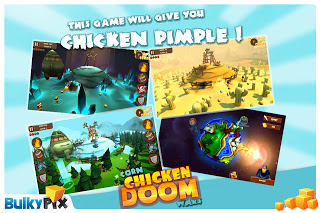 With Chicken Doom priced at $2.99, and on sale at the moment for $0.99, it’s definitely a game that base defense fans should check out. Yet again, Bulkypix doesn’t disappoint. The tap controls could use some tightening up, and more content would be great, as right now, even though the levels offer up plenty of replay value, especially when you take into account the 12 GameCenter Leaderboards, one for each stage, as well as co-op boards, and 24 Achievements. It could use some improvements, but it’s a huge step in the right direction for the 3D Base Defense genre.