Old-school retro score-chasing arcade games have quite a following, especially in the iOS world. With so many older gamers coming back to the scene, finding out that they can enjoy quick gameplay sessions on their phone, it’s not really a surprise that there’s so many of these games available in the AppStore. Dom n’ Tom’s Bug Hunt 8-Bit is a prime example. 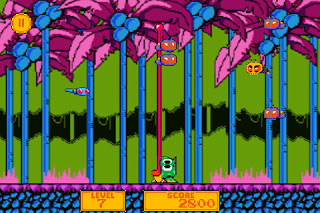 The main goal of the game is to eat as many bugs as you can, getting the highest score possible. With bugs going back and forth across the screen, and mixed in with bees, which kill your character, it’s simple, quick gaming. Controlling your character is easy, just place your finger on the screen, and drag left and right to move your little frog, and swipe up and down to move his tongue. Once you have plenty of bugs stuck on your frogs tongue, drag it back down so that he can eat them, and get the points. Sadly, this is the only control setup, no virtual buttons for those of you who are comfortable with them.
There are 7 levels, kind of set up like Tetris’s levels. Each progressive level will give you more bunches of bugs, at a faster speed. While you’re playing, your level will increase as you catch more bugs, but you can choose to start at a specific level if you like. The background colors change as you play, but there are no real different environments. 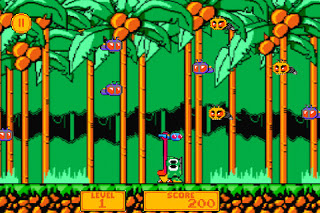 Unfortunately, this is all the game has to offer. Yes, it’s simple, yes, it has great retro graphics, and yes, it has the potential to become very addictive. But with only one gameplay mode, no power-ups, only 3 different bugs, and the biggest disappointment, no online leader boards, there’s not really much there to pull you back to the game after you play it a couple of times. 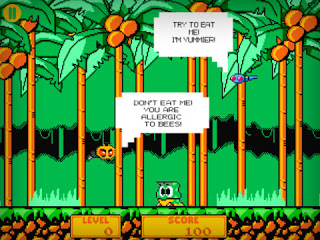 Bug Hunt 8-Bit is great for those little spaces of time when you have a minute or two to waste, and being Universal and priced at $0.99, it’s not bad if that’s what you’re looking for. But if you’re hoping for something that will totally draw you in, and have you coming back to compete for high-scores, it’s lacking. Released last year, and not receiving one update, it’s not looking like that will change, but hopefully more attention is given to this little game with tons of potential so that Dom n’ Tom maybe get the push they need to take advantage of it.