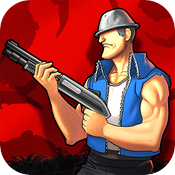 10tons has brought out some fantastic titles for the iOS gaming scene. Azkend, Joining Hands, Grim Joggers, Sparkle, and more. Boom Brigade, a tower defense/line-drawing strategy arcade title, is definitely one of my favorites from 10tons, which is kind of funny, because line-drawing games and I don’t really get along. But there’s something about Boom Brigade which just hit’s the right nerve with me. Now, I get to experience it all again. Boom Brigade 2 is finally here, and it’s everything you would expect in a sequel. The same great gameplay mechanics and type of gameplay as the original, with more of everything. 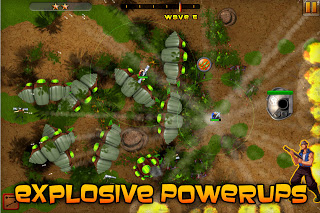 Boom Brigade is a real time strategy line drawing defense title. You might not think it, but all of those genres mashed together really seems to work out well, especially since 10tons has done such a great job with the design of the game. You’ll guide army men around the map by drawing lines for them to follow. Enemies come at you from all sides of the screen, and you need to defend your base through wave after wave.
There are two modes contained in the game, the 30 level Campaign, and a Survival Mission Mode. In the campaign mode, before each mission, you’re able to select your load outs for the givin units, and then go into battle. While you’re in battle, you’re able to pause the action with the icon in the lower left corner, and draw the lines for your men to follow along. This really helps out when the action gets hectic, and it does get very hectic. Throughout the stage, various power-ups and health containers are dropped from the sky, helping you to fend off the onslaught of aliens. 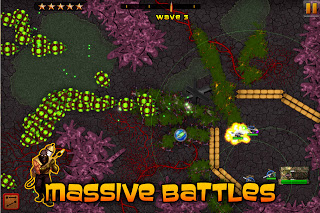 Boom Brigade’s line drawing controls are some of the best I’ve ever experienced on the touch screen. One of the things that really turns me off of line drawing games are the clumsy controls, never really drawing the line exactly where I want it to be, or not responding and cutting off halfway through a path. Here, 10tons has done an excellent job making the controls precise as well as responsive.
Graphics-wise, Boom Brigade 2 has a top/down view of the battlefield, but that doesn’t effect the gameplay like you might think. Your units are very clear, and it’s easy to tell if you’re moving your machine gunner or shot gunner, and the environments have plenty of detail. The animations also help add to the gameplay, with great death scenes and sounds, blasting the enemy away becomes very satisfying. 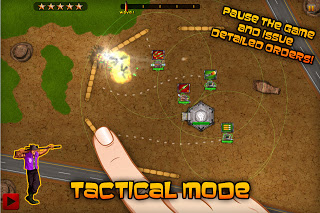 With 30 missions spread across 3 environments, unlockable upgrades for every character, and loads of line drawing strategy, Boom Brigade 2 is a game that’s definitely worth picking up if you’re even remotely interested in the genres. Priced at $3.99 (on sale ATM for $2.99), and Universal, as well as including GameCenter support with a whopping 11 leader boards, and 16 achievements, and a whole set of Survival Missions, there’s loads of replay value to be had.