The App Store is full of awesome platformers. Sure we haven’t seen an official Mario port yet, but you can’t help but think that we are getting closer and closer to finding another classic. 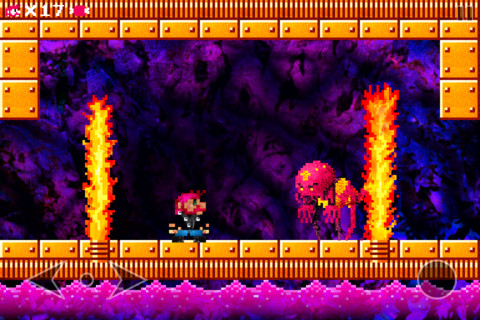 At first glance, you’ll be taken aback by the eerie similarities between the badass biker in front of you and the plumber who never fixed a pipe. In terms of artwork/composition Awesomeland is unique because it uses photorealistic graphics to create a retro, pixel-style feeling. The bright colors of the alien base brings about thoughts of hippies and rainbows, but this is only a good thing. The contrast this creates with the chracter and the story is simply hilarious and it adds a ton of personality to the game. 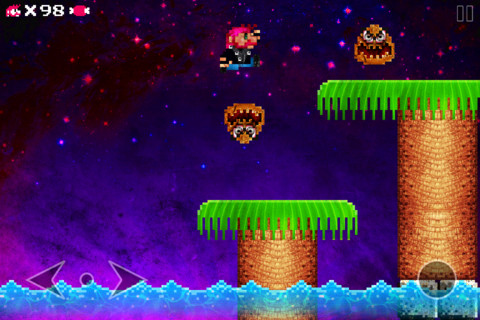 Controls are the cornerstone of every platformer. Awesomeland has only virutal controls, but these work well enough to quell any desire for other control schemes. The only complaint that I have is that the UI is very unappealing. Generic menu pop-ups and bland control buttons detract from the retro feel of the game. (The menu windows look like they are from the iOS Settings app). Apart from that the controls work smoothly enough. Although the jump button is a bit small, I haven’t run into any problems yet. 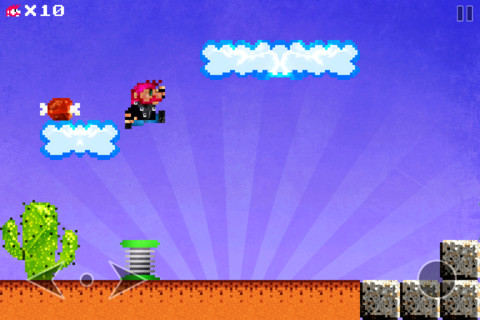 Awesomeland shines with its truly retro-style gameplay. Stomp on bad guys and bricks alike to smash them into bits. Run and jump your way through each level and reach a boss at the end of each world. If this all seems a bit Mario-like to you, you are absolutely right. As a parody of retro games of the past, Awesomeland does an amazing job of putting our favorite parts of games like Mario in humorous light. No princess to rescue here, it’s time to get your motorcycle back. The abrupt transition from deserts and islands to an acidic alien base also adds to the random humor of the game. To add a little depth, extra-life heads and power boosting drumsticks are scattered around the levels (these act like one-ups and mushrooms). All in all, gameplay makes Awesomeland awesome. 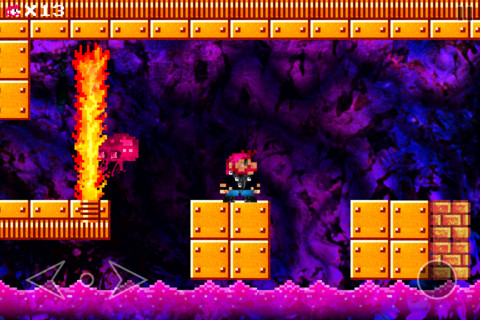 Platformers are often judged by length alone, and Awesomeland is not exactly lengthy. With 30 fairly short levels spread across 5 worlds, you won’t spend long playing through the entire game but you sure will enjoy your time. We can only hope that more levels will be added in future updates.

Awesomeland is a great platformer for iOS. Although there isn’t anything groundbreaking here, I give the devs a big thumbs up for taking at stab at some retro-gaming humor. If you’ve been waiting for a good laugh and want to have some retro-platforming fun, grab Awesomeland for only $0.99.