Casual arcade games have become a staple of the AppStore over the last couple years, so it’s no surprised that this is the genre a lot of developers start off with. OrionArts has chosen this path, and done so wisely. Their first release, AirHead Adam, is a well thought out, easily accessible, perfect for all ages yet still challenging addition to the casual arcade genre. 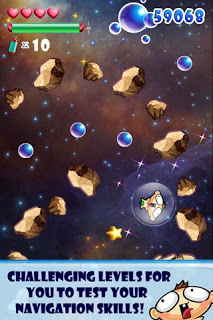 In the game, you’ll control Adam as he searches the galaxy for his beautiful lost girlfriend, traveling through space in a bubble filled with air. You’ll need to guide Adam by tapping next to his bubble to push him in the opposite direction and gather air bubbles to keep him breathing, and stars to get upgrades. There’s also various hazards and obstacles in each level that you will need to destroy or avoid in order to progress through the game. Rocks, aliens, and space ships that shoot at you are around corners, and sometimes you’ll get boxed in by one, two, or all three of these. To get out of it, you’ll need to tap on Adam, and drag in the direction of the object you want to destroy, and he will shoot out some of his air in a bubble that will explode when it hits whatever object you’ve aimed at, and if you hit a space ship, collectable stars come flying out of it. You’ve got to be careful though, because this takes away from your air supply, and running out of air is a game over.
The screen moves at a steady pace, so you’ll constantly be moving Adam upwards through the rock maze, grabbing air bubbles. If you fall behind, and go off into the bottom of the screen, it will cost you an air tank, of which you will start off with one, but can buy more in the shop. This is sometimes a useful thing to use in levels that you’re having a hard time with, because once you sink into the bottom of the screen, and use your extra air tank, you will shoot up through rocks, bubbles, stars, aliens, and space ships quite a ways, putting you further into the level, and so long as you beat the level with your extra tanks, you will not have to play that level again, unless you want to come back to it later in the game when you’re more powerful. There are also power-ups littering each stage, shields, and meteors, as well as big air bubbles and huge stars, and it’s a good idea to try and collect each of these that you see. Some are hidden within big orange rocks and metal tanks, but there are also aliens hidden in these, so it’s always a gamble when breaking them open. However, it would have been nice to see more power-ups, like increasing your air bubble shot power for a short time, point multipliers, or speed increasers and decreasers.
There are 36 levels in the game, split up with 9 in each difficulty, Easy, Normal, and Hard. The levels are all lined up the same, like level 1 on Easy is the same as level 1 on Normal, but the speed is changed, and there’s a few more blocked in areas, and hazards making it just slightly harder. Normal and Hard levels are unlocked once you complete all the previous difficulties levels. You can also pay to unlock these, but if you haven’t gotten the previous difficulty mastered, chances are, the levels will be pretty frustrating.
This brings us to the IAPs. Now, at first, these might turn you off. Chances are, you’ll earn about 120 or so stars in the first 4 levels, and in the shop, upgrades to power-ups are all 1000 stars for the first upgrade, and more after that, and new characters are 4500 stars. With that, you might start thinking that it will take until level 30 or something to unlock one upgrade. However, at the end of your game, when you die, you are given the option to redeem stars that you have earned throughout your game while achieving various achievements. Things like getting 20 bubbles in a row, or 15 stars in one level, and these add up VERY quickly. At the end of my first game, I made it to level 9 on the easy levels, and ended up with 1500+ stars after everything was said and done. So gamers are not pushed as hard towards the IAP as you might think at first. 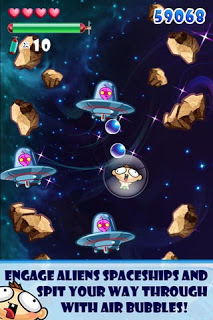 AirHead Adam is supported by OpenFeint and GameCenter, as well as having FaceBook and Twitter options to upload and share your high-scores. Within OF and GC, there’s a whole slew of leader boards to try and top, including ones for Best Overall Score, Best Overall Time, Total Easy Mode Score, Total Normal Mode Score, Total Hard Mode Score, your Best Time In Easy, Normal, and Hard, your Best Overall Fast Time, Top Bubble Combo, how many total Stars Collected, and more, along with 47 achievements. You can play the game slow and steady, collecting all the bubbles you can, or fast and dangerous, collecting only the minimum amount of bubbles, and getting to the end of each level as quick as you can. Both ways of playing have leader boards, and with that, it adds quite a bit of replay value on top of the leader boards, because you’ll want to go back and see how quick you can get through the levels if at first you went slow, getting the highest bubble combo you could, or go through slow, getting as many bubbles as you can if you flew through the levels the first time. There’s loads of planned updates, and right now the game is priced as free, so it’s definitely worth checking out, as even if you don’t buy any IAP stars, there’s plenty of gameplay to keep you entertained, as well as challenged. OrionArts has definitely proven that they know exactly what it takes to make a cute, fun, challenging casual arcade game that’s good for all ages, as well as keeping it full of gameplay even though it’s free, while giving gamers the option to support them through IAPs that are not necessary to complete the game. If they keep up this basic model with future games, they could very well be sitting pretty on top of a fairly large list of titles.
AirHead Adam gets a score of 8 out of 10.