Pocket Warriors is a new 2D side-scrolling action-RPG from Rainbow Game. You’re able to switch between two characters while you play, making the gameplay a little more interesting. It’s your job to keep the village safe from incoming monsters and enemies, while becoming stronger warriors. The game kind of plays like a 2D version of Monster Hunter, which isn’t really a bad thing at all. Rainbow Game has pulled it off quite well.

The controls for the game are simple, but work perfectly. You’re given movement buttons, left and right, which you don’t need to constantly pick your thumb up from to change directions, and 3 buttons, an attack, guard, and switch character button. To enter the stores, upgrade shops, or quest sections, the attack button changes to an enter button. Graphics-wise, Pocket Warriors is done in a professional manor, and looks very polished. The environments are varied, and there’s 15 different enemies along with huge bosses that are designed extremely well, along with pretty nice animations. 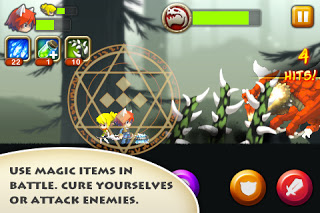 You start off in the village, and can talk to four different characters. An item storage lady, upgrade blacksmith, weapon shop panda, and the elder who hands out your quests. The quests need to be done in order, and each gives you a certain amount of gold when completed. To do the quest, you exit the village, and are taken directly to where you need to be in order to complete it. The quests are generally one of two options, kill X amount of enemies, or kill a boss. However, the lack of variety when it comes to the quests isn’t really a big deal, as you’ll need different strategies and items to defeat each different enemy, as well as each of the bosses. Combat is simple, with the attack and block buttons, you can also equip magical items up under your character avatars in the top left corner. These magical items can be bought in the shop, and do not drop during battle. More slots can be bought with the money you earn doing quests. Bosses do give off elemental items each time they’re knocked down, and you can use these to upgrade your weapons. There’s no exploration, no mixing items, or searching for other items, everything can be bought in the shop or won through a boss battle. There’s also loads of different weapons to buy and upgrade, each with different attributes and qualities.
The second character AI is pretty upsetting though. Sometimes the second character will hardly move at all, but when they do, they attack at about half the speed as when you’re doing the attacking, and almost always let enemies harm them. Being able to set up what you want a character to do, like in Final Fantasy, to attack, block, or just use the magical items, would have made the second character combat a lot better. 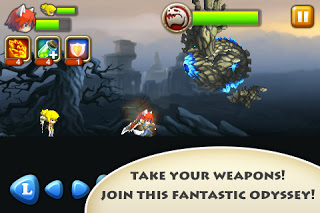 With 36 quests, each taking a couple minutes, some taking 4 or 5, the game doesn’t have very much gameplay, but it’s set-up in a way that new levels and quests can be added with updates pretty easily, so I’m really hoping for these types of updates in the future, and some tweaking of the second character AI is needed to really be helpful too. A scoring system would also be a very nice feature to see in the future, as well as online services, including leaderboards and achievements. It would also be extremely nice to see some defensive qualities added to the shops, for instance, some upgradeable armor, and shields Aside from this, Pocket Warriors is a great monster killing quest game, and what it has is done extremely well. For $2.99, it’s well worth having if you’re into the genre. For Rainbow Game, Pocket Warriors has definitely helped them make their mark on the action RPG scene, and I’ll be eagerly awaiting future updates, and future games from the company.
Pocket Warriors is getting a score of 8 out of 10.
Link: http://itunes.apple.com/us/app/pocket-warriors/id455560723?mt=8
Posted in: 2.99, Action, Adventure, RPG’s, Side-Scrolling, Syntheticvoid