There’s no doubt in the world that when you first see this game your first thought is “Wait, this looks just like Cut the Rope”! It does sort of resemble Cut the Rope, especially since the main character in this game Yammi bares a strong resemblance to Om Nom. Even though Save Yammi HD [$0.99 (iPad Only)] by Bulkypix looks like it might be a ripoff of Cut the Rope, it’s not. It’s actually the complete opposite. You could actually say that Save Yammi builds off of the things that made Cut the Rope such a success and they turn it into their own. In this game your goal is to deliver the cookie into Yammi’s mouth. In each of the over 100 levels you can collect the stars within each level to earn bonus points to boost your overall score. There is a 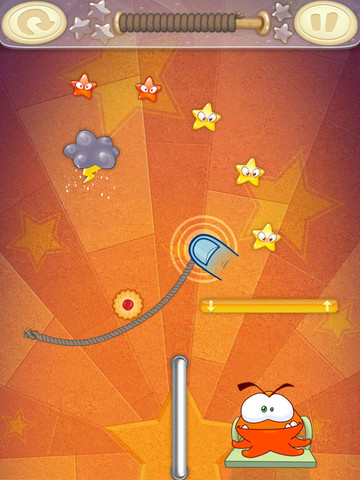 rope that you can use in this game, but there’s no cutting ropes. Instead you can draw the ropes. You can draw the ropes before you start the level by popping the bubble that holds the cookie. The bad part is that you can only draw the ropes you’ll need at the very second you begin the level, because the ropes actually start to vanish as time moves on. So that means by the time you’re near Yammi your rope that you drew might have completely disappeared there. One of the coolest things about the ropes is that once you draw it, it’s not completely straight. It actually acts like a real rope by sort of drooping down a bit once you set it. You’re also only given a limited amount of rope to use. I actually love the idea of being able to draw ropes. It might take you a couple of replays to get the ropes exactly where you want them, but that’s what keeps you playing and makes the game absolutely addictive! New elements in the game are gradually added over the 100 levels. There’s power-ups that allow you to float and a bunch more of other things. There’s also a great deal of obstacles such as electric volts to watch out for or lightning to avoid or risk getting your cookie obliterated into pieces! I also forgot to mention that the gyroscope in the game is extremely helpful and works perfectly. Overall, I found Save Yammi HD to be a fantastic puzzler. There’s definitely a lot more thinking in this game 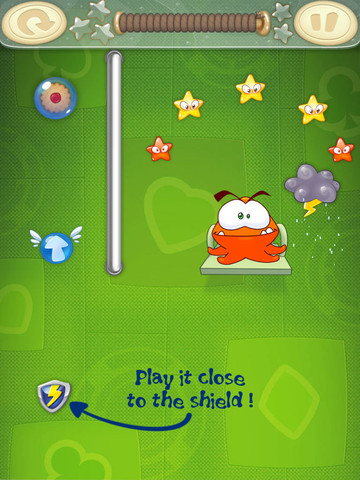 then there is to me in Cut the Rope. The levels in this game were just very well done and though out. This right here is a true puzzle game. My final score is 4/5 stars. The game can be frustrating at times but in the end it’ll keep you coming back every time. So if you’re looking for a cute challenging game or your a Cut the Rope fan and you want more of a challenge then go check out Save Yammi HD by Bulkypix for $0.99 here. This game is only available for iPad… no I’m just kidding. You can also pick it up for your iPhone & iPod Touch for just $0.99 also here.