It seems like there are endless dual stick shooters released each year in the AppStore. Coming across one that is original can seem like a chore sometimes, and most will pass up a game from an indie developer for a big name title from a bigger name developing company. But when many saw the screens for iDaTank,they couldn’t resist. And what they got for their curiousness was a different and original take on the dual-stick genre. 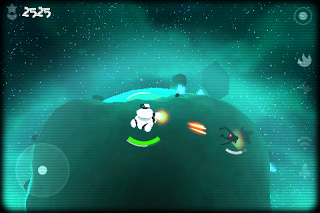 iDaTank isn’t a typical dual-stick shooter. For one, it doesn’t have dual sticks. The aiming is done by the game, a la auto-aiming at the closest enemy to the player. But Pavel Tsarev has done an amazing job creating a world that is still as dangerous as it is beautiful. In iDaTank, you play as a lone scouting drone searching different bite-sized planets for crystals that will power upteleporters leading you to the source of anunknown signal sequence. Along the way, you’ll encounter different life-forms on each cluster of planets, of which there are five. There’s also plenty of environmental hazards to make the strange 3D world seem like a maze at first. The enemies in iDaTank are extremely varied throughout the game. And once you get about half-way into it, seeing what enemies are on the next planet becomes a part of the whole gaming experience. Figuring out how to deal with the enemies and plant life of each world requires quite a bit of planning. You’re given 5differentweapons, each with different characteristics, for instance, a freeze gun, a high-powered, but slow firing weapon, grenade throwing weapon, and more. Each of the weapons are upgradeable up to 3 times using the points you get while killing the life-forms on each planet. Enemies can quickly gang up on you, especially during the boss battles that take place at the end of each cluster of planets, often leaving running away to recharge your health and try a different tactic the only option. All of this gives the game a real feeling of growth as you move through it, discovering, learning, and developing new tactics to get through each planet. 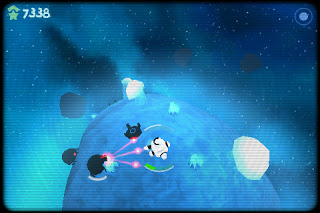 There’s also a pretty depthy RPG element to the game that’s a lot like the one in Solomon’s Keep. Kill enemies, gain experience, pick one of three upgrade choices. Each choice you make will effect how you experience the game as a whole. You can stick with picking quick movement and lots of firepower, so you can dodge most enemies, and just blast away through the whole game,or sacrifice speed for agility, and firepower for defensive upgrades. You’re also given a rank, which goes up as you kill enemies, and increases your general firepower and armor just slightly. The default controls for iDaTank are invisible, holding down and rolling your thumb on the screen to move, like there was a movement stick there. This minimalistic approach to the user interface is a theme in the game, even with the on-screen controls. You also have the option for a fixed joystick, or a floating joystick. There’s also an option to show weapon hotkeys on the right side of the screen, so that you don’t need to go into the pause menu each time you want to change a weapon. You’re also given an option to buy more lives in the pause menu, the price of which goes up after each life is bought.
Everything about iDaTank just screams professional. From the customization to the game play and graphics. If played like a dual-stick shooter, you might not enjoy it much, but if played like an adventure game with a dual-stick shooting control setup that has something new to offer, and that will grow with you as you play, you might just find a game that will stick with you for a long, long time. I give it a 5 out of 5, and consider it to be one of the best releases on the iOS of 2011. You’d be hard pressed to find another game like it. It’s one of the greatest adventures you can take on your iDevice for $1.99.
Link:http://itunes.apple.com/app/idatank/id438040415?mt=8
Posted in: 1.99, Dual Stick Shooters, Games, iDaTank, Syntheticvoid, TheAppShack