Radiangames has definitely made a huge splash in the AppStore with their previous releases of Super Crossfire, Fireball SE, and Ballistic SE. Earlier this week, their newest release, Inferno+, hit the AppStore, and as you might have expected, it’s one hell of a game.
Originally released on XBOX Live like their previous titles, this enhanced version of Inferno includes 40 levels, multiple upgrades, 3 difficulty levels along with a special New Game+ difficulty, 20 Game Center achievements, Retina Support for the new iPad and iCloud saving. 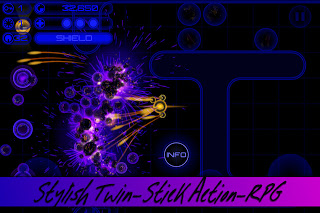 Unlike Radiangames past releases, Inferno+ is not a high-score chasing game. Instead, it’s centered around exploration, blasting away hoards of enemies and upgrading your ship. Granted, Super Crossfire, Fireball and Ballistic were all about blasting away enemies and upgrading your ship, but none of them included the exploration aspect, and considering this is the first title by Radiangames that includes exploration as a main gameplay aspect, they’ve done a fantastic job building Inferno+ around it. 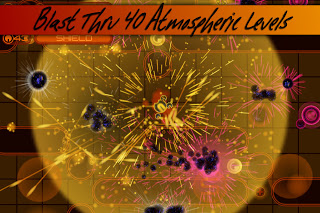 While you’re blasting enemies, you’ll be searching around each of the levels trying to find all of the orbs, keys, bombs, and hidden areas. The orbs are used to unlock upgrades and purchase items like extra drones which follow close behind you, and help destroy the enemies, bombs, which take out screens full of enemies, and keys, which unlock areas of the levels that are behind impassable boarders.
You will need to collect all of the bombs you can because there are some enemies which require a bomb to take them out. There are also black holes which can only be dealt with either by completely avoiding them, or blowing them up. There’s also a shield power which you can upgrade with electricity, allowing for you to damage enemies while using your shield. In the later levels, switching between your shot and shield will be a maneuver you’ll need to get comfortable with in order to get through the game.
Adding to the excitement and overall feel of progression, every 10 levels will take you to a boss battle. These boss battles can get very hectic, and are some of the most exciting sections of the entire game. It is kind of upsetting that you can’t go back and replay previously beaten levels, because these boss battles would get loads and loads of gameplay out of me. 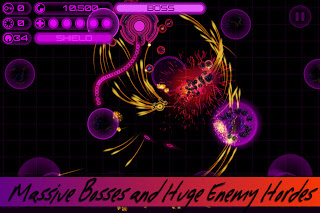 There are also hidden areas which are behind the levels walls. In order to find these, you’ll need to either drag against the walls, or fire your shots directly at them. Your shots go through the holes in the walls, which can also be used to your advantage, as the enemies can not go through the holes in the walls. There are some holes which only open up after you reach a certain area of the level, and some which will close behind you after you’ve entered them, letting you only go through them once.
Also hidden throughout the game are special bonus levels. These can usually only be found by using extra keys picked up throughout the game, or purchased from the shop area. These bonus levels give you 30 seconds to make your way through a level, picking up as many orbs and bombs as you can. 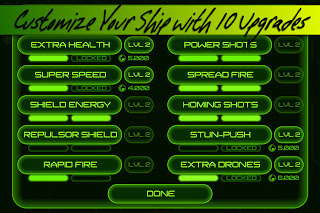 The graphics in Inferno+ are very similar to Ballistic and Fireball, with loads of circular enemies, each distinguishable by their colors. The levels are also designed with neon boarders, and the animations for explosions are also very similar to those found in Fireball and Ballistic, only not as extravagant. The controls allow for a static and dynamic control stick as well as switching the move and fire arrangement. There are also sensitivity settings and you can set the joysticks and bomb and shield buttons anywhere on the screen, which is a fantastic addition. On top of this, you can also use the Joypad application and use another device as your controller. 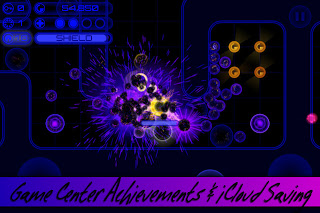 Even though there’s no scoring system, and no GameCenter leaderboard, I think Inferno+ might just be my favorite game from Radiangames. If there was a scoring system alongside the gameplay, Inferno+ would blow Radiangames previous titles, as well as loads of other dual stick space shooters, out of the water. But the game centering around exploration and upgrades kind of makes up for the lack of a scoring system. With Inferno+ being priced at $2.99, being Universal, and developed by Radiangames, who are fantastic with player feedback, and with supporting their releases, it’s hard not to support a development team as responsive as they are. If you’re a fan of dual-stick shooters or exploration games, Inferno+ will be right up your ally. If you’ve already purchased Radiangames previous releases, you’ll pretty much know what you can expect with Inferno+, but if you’re new to Radiangames, this would be a fantastic title to get to know them with. Chances are, it’ll wind up on my top 10 games of 2012 list, and never leave my devices. 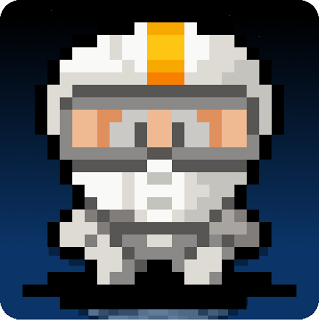 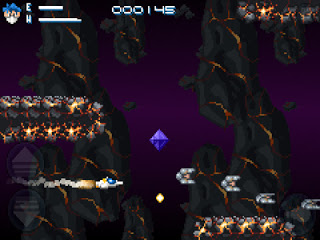 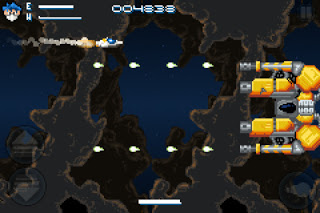 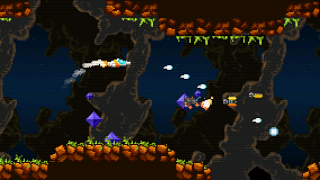 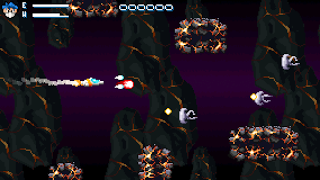