Pokemon has been at the root of most peoples early childhood and even later on in life.  Some feel ashamed to have once been a part of this huge phenomenon but others still embrace it today.  After much tension and debate over Nintendo porting over a Pokemon game to iOS they still remain stubborn and adamant to not let that happen.  Fortunately Puppysauraus, a game that plays similar to Pokemon has been released, but it is not the type of experience most imagined. 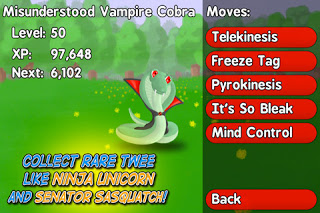 From the first time you open up the game you realize that it is marketed towards the younger market.  The graphics are cutesy, the colors are vibrant and the creatures names are no where near threatening.  I remember my first thought being, I hope my friends don’t see me playing this.  But the game has turned into something of a guilty pleasure with me and some of my fond memories of playing Pokemon have been brought back to life.
You start off by being asked if you are a boy, girl or robot. Then you get to choose your skin color and then are off on your journey.  You receive your first Twee, which is the equivalent of a Pokemon and are briefed on the history of the game and why you are venturing out on your quest to stop/collect the Twees. Shortly thereafter you initiate your first battle.
—————————————————————————————– 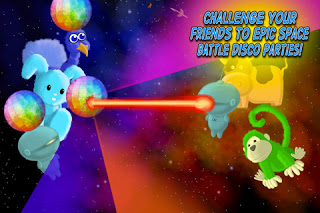 The battle system is quite unusual to say the least.  You can have up to 3 Twees on the battlefield at one time and can not switch others in its place if one retreats. Then you get to choose what move your Twee performs on its opponent. There are many different attacks like “Bap”, “Tag”, and Freeze all of which correspond with a cute little animation of your character doing that to the other Twee.  Needless to say as this is a kids game, none of the creatures get harmed and the attacks are done in good fun which is where the over cutesy nature really struck me cold. Then you can try to catch wild Twee which appear randomly across the map. To catch a Twee you don’t use a Ball or kind of catching mechanism. You make them your friends by performing specialty moves like “Nuzzle”, “Dance” and others to make their love meter fill up and thus join your team of Twee.  To initiate one of these battles you have to run into a sparkly portal found randomly around the wild area you are in.  If you clear an area of all the Twees you get a special reward.  You control your character with the aid of a joystick which feels fairly responsive.  From a menu you can change your Twee Team, tweak the settings, and check your teams stats.  When you want to quit all you have to do is exit out of the app and it will save exactly where you were when you left.  Included with the game is the ability to upload your own drawings into the Twee world for others to catch and battle.  All you need is any drawing app like Doodle Buddy or Sketchbook and your ready to draw!
——————————————————————————————-
The music is amazing and really gives the game an epic soundtrack.  The sound effects are a little annoying in battle but I got used to it after a few matches. Visuals are as mentioned before, geared towards kids and are very pastel colored in nature. In-game Menus on the other hand leave a little to be desired.  The standby Twee menu utilizes the basic blue and white list menu which does not correspond with the mood the game has set.  My only other complaint is that I would like to see a clothes and hair shop where you can change the look of your character and thus personalize your experience.
——————————————————————————————-
Overall if your into Pokemon or just want to be a kid again then this is the game for you.  Just don’t let your friends see you playing it! I give it a 4.5/5.
Itunes Link: http://itunes.apple.com/app/puppysaurus/id432228575?mt=8

Ruffled: Feathers Rising is a free-roam 3D game from Pixelloop. In it, you play a bird set on taking revenge on the humans for invading their land. Just so happens that the only way you can take revenge on them is by covering them in feces, which actually makes for a pretty good game.

You’re given 5 different areas to exact your revenge; Residential, City Park, College Campus, Construction Yard and Downtown. Each is a huge open world in which you get to fly around collecting worms and gold pieces, flying through time circles, and nose-diving down to dump poo on unsuspecting people and cars. You’ll have different amounts of time for each level, starting at 5 minutes, and going up to 10, to rack up as many points and achievements as you can. There’s also practice modes for each level, which let you fly around, getting to know the layout of the level. Collecting worms adds to the amount of poop you get to drop on people and cars, while flying through rings extends your level time. You’ve got a rage meter at the bottom of the screen that rises with each successfully landed poo, and once it’s filled, the time stands still, and your points multiply. Entering Rage Mode is the only real way to get awesome scores. 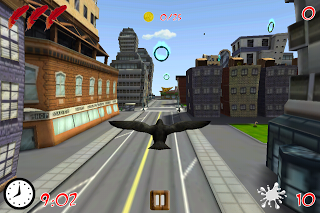 Each level is filled with pedestrians and cars, and are pretty big. Flying around is done automatically, and you control your flight by pressing and dragging on the left side of the screen. The controls work reasonably well, but adding tilt controls would really help give the player the feeling of flight. The right side of the screen is tapped on when you want to drop one on someone. Each time you do, the camera follows your poop until it hits an object. This makes crashing into random objects in the world a pretty common occurrence unless you can manage to keep steering your bird while the camera is locked on your poop.
The graphics in Ruffled are pretty good. Environments are varied and detailed quite well considering how big they are. Walking and driving animations are a little funny looking, but they work. You can tell that each moving object is following a strict lined out path, but this does make it easier to plan your attacks and follow people around. The game runs relatively smooth, and hasn’t crashed or lagged out on me once. The music and effects fit the game and add to the atmosphere very nicely. 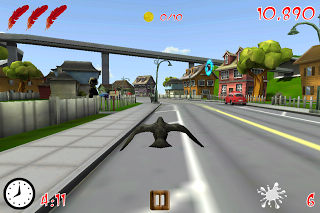 One thing I love about this game is that you can play it one of two ways. You can go achievement hunting, exploring the levels as thoroughly as possible, picking up every item you see. Or you can focus more on pooping on the people and cars, flying around in Rage Mode, and going for a high-score. I also love how each level is progressively longer than the last, and all unlocked from the moment you start up the game. So you can pick a level depending on how much time you want to spend playing the game.
There’s enough replayability to keep Ruffled on your device for some time, but without online leaderboards, you’ll only be able to beat your own previous scores. There’s also no story beyond the first intro images. It’s be great if after you finished a level, you’d get a cut-scene or series of images having the bird flying back to the flock, and telling of his wild escapades and achievements. If animations were cleared up, the story was expanded on, online functionality was added, tilt controls were thrown in, and the performance was cleaned up a tad, this would be one hell of a game. It does have Universal support going for it, so you can experience the great environments on both your iPod and iPad in the same resolution, and $2.99 for this open-world free-roam game is a pretty decent price. I do have high hopes for the game though, as the developers are active on the Touch Arcade Forums, and listening intently to iTunes AppStore reviews.
Ruffled: Feathers Rising is going to get a 3.5 out of 5 stars from me
Link: http://itunes.apple.com/us/app/ruffled-feathers-rising/id448835495?mt=8
Posted in: 2.99, Adventure, Free-Roaming, Syntheticvoid, Universal