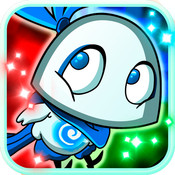 I won’t bore you with the excessively long list of games that were released before the inception of The App Shack. Needless to say; it’s LONG. But there are handful of games that will never leave certain iDevices, and games that we’re reminded of when a developer comes out with another iOS release. One of those games happens to be Grumpyface’s Wispin. Wispin was one of the first FREE games I ever got in the AppStore, back in December of 2010, right after I found out that developers actually had days that they would give their games away for nothing. That’s right, I was a slow learner. But once I found that out, I turned into an AppStore junkie, and Grumpyface’s Wispin had remained and been transferred over to every iDevice I’ve owned, and the release of Super Mole Escape has reignited my love of the game. 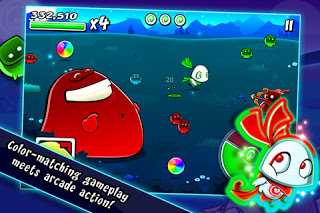 Now, just like Bring Me Sandwiches!! and Super Mole Escape, Wispin is a little wacky. Granted, it’s not as totally off the wall as BMS!!, but Grumpyface’s humble roots are definitely showcased within it. Wispin contains 3 separate environments each in 2 different gameplay modes; Standard, which starts you out with 3 lives, and Intense, which starts you out with 1, and further into the hectic, Standard gameplay.
Containing two control methods, there are two different ways to play the game, and I absolutely love when controls offer up a totally new gameplay experience. When using the tilt control method, Wispin plays a little like Tilt To Live, with color control, and using the virtual joystick plays more like a dual-stick arcade title. 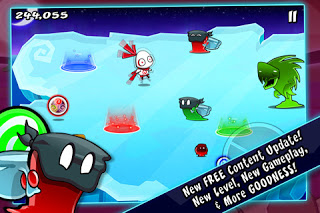 The main goal is to change the color of Wispin with the color wheel, to match up your color with the enemy’s color, and then smash into them, effectively destroying them. There are 3 different colors you can turn Wispin into; Red, Green and Blue. However, not all enemies follow this set of 3 colors all the time. Occasionally, they will turn purple, yellow, orange, and more, making you avoid them until they turn back into one of the 3 basic colors you can match up with. Wave after wave, Wispin is an endless game, with you trying to survive as long as you can. 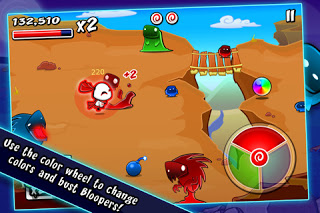 The scoring system helps add to the fantastic gameplay, with perfect rounds and multipliers/combos, reaching for both is essential in scoring big. At the end of each wave, if you did not get injured by one of the evil Bloopers, you’ll get a ‘Perfect Wave’ bonus, and this bonus score increases with each consecutive perfect wave you manage to get. Multipliers and combos are based on a gauge. Once you destroy a Blooper, the gauge is filled, and starts quickly running down. To keep a combo going, you’ll need to destroy another Blooper before the gauge empties again. This gauge can also be filled up to the point where you’ll spin wildly around, bouncing off of everything in a ‘controlled’ sort of chaos that lets you destroy all Bloopers of all colors. 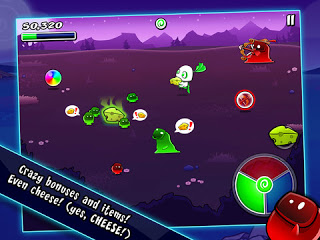 Along with the spinning power-up, there are items which you’re able to pick up as you make your way through each wave. Cheese that draws Bloopers of a certain color into one area, bombs that take out one color of Bloopers, arrows that you can fling at Bloopers and a special tap power-up, which, once activated, turns Wispin into a blob, disappearing from the gameplay area, and lets you tap on each of the Bloopers, destroying them. The items do stack up when you collect like items, but if you pick up a cheese item when holding arrows, the arrows will be replaced. 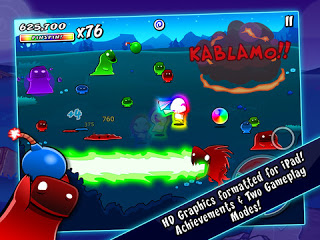 The graphics and animations in Wispin are fantastic. Cartoon-esque environments and character models, which are great by the way, and great explosion/death animations all runs extremely smooth, even on 1st Generation iPod Touch devices. The music and sound effects are great as well, adding to the arcade sound and feel of the whole game.
Although it could use another gameplay mode and more enemies. Maybe a couple more power-ups, with Wispin priced at $1.99, and $2.99 for the HD build (which has bigger gameplay areas, and re-sized virtual controls), and GameCenter support with 14 separate leaderboards, including boards for highest score in both Standard and Intense Modes on each of the 3 different environments, highest wave reached in each environment, longest survival time in each environment, highest combo and total Bloopers destroyed, as well as 21 hard to snag achievements, there’s endless replay value, and several different ways to play when score-chasing. Since Wispin’s release, Grumpyface has created two more extremely wild and fun titles, both of them getting 5 star ratings in our reviews, but it’s great coming back to Wispin, to see where it all started. It’s a game that was amazing when it was released, and still holds up extremely well a couple years later. I’d definitely recommend it to all iOS gamers, casual and hardcore, and consider it a classic iOS game.