Star Warfare: Alien Invasion is a dual-stick, first person shooter game where you are matched up against hordes of vicious aliens through a 30 stage campaign.  You can also play these levels in co-op with your friends through GameCenter. 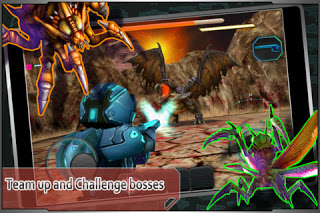 Gameplay: 4.5/5
The object of the game revolves around one fairly simple objective: Kill as many aliens as possible. In singleplayer you are treated to 5 different arenas that each have 5 levels of difficulty to play through. After you complete a level you gain some virtual currency which you can use towards buying new weapons or pieces of armor.  You can also choose to select survival mode for each the arenas allowing you to test how long you can stay alive. This is a great way to earn a large sum of money.  In co-op you can play through these arenas with your friends or choose to attempt to beat one of the three bosses. These bosses are very tough and only experienced players with decent armor and good weapons should even attempt these missions.  There is a max of three players that can join your game.  If they die they are booted from the game if they do not have a revive potion.  Then the remaining players are allowed to keep on playing until they die since all co-op missions are survival. 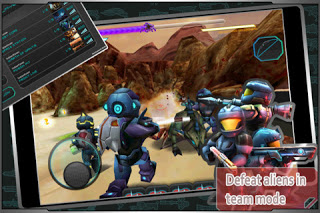 Controls: 4/5
The controls are two control sticks, one for moving and one for aiming.  You tap the right stick to fire and are allowed to aim while firing which is extremely useful in intense situations.  To change the direction that you are looking in, swipe the screen above the dual sticks.  I have not had any issues with the controls on the iPad but have not had a chance to test it with my iPod yet. They definitely serve their purpose well. 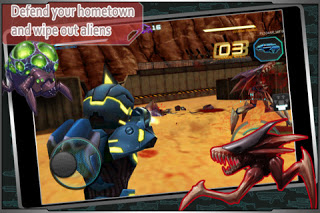 Graphics: 4/5
Nothing to complain about here. The graphics look very professional and are quite good.  They fit in well with the mood the game is setting. 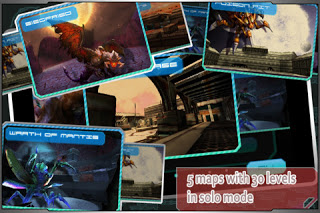 iAP: 3/5
This is where the game loses some of its selling points as it does have a rather large collection of iAP’s. You can choose to buy a material called mythril which can be redeemed for more in-game money or for exclusive weapons.  Though there are a fairly good amount of weapons ripe for picking the really kick ass ones cost a small fortune in mythril.  With packages of Mythril up to $99.99 dollars in price it is rather clear that they hope to make a lot of money off of these iAP’s.  Luckily you don’t necessarily need mythril to complete the game and are really only used for cosmetic purchases and unique weapons.  I wouldn’t put off buying the game just because of the in app purchases as the core game experience is really good. 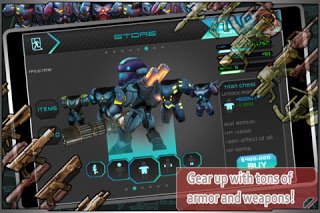 Overall: 4.5/5
Overall this is an awesome FPS shooter with intense alien action and a co-op mode that lets you join forces with your friends. This is definitely a worthwhile purchase at the small price of $0.99.