Virtual City Playground HD [FREE] by G5 Entertainment is sort of sequel to their popular Virtual City HD [$6.99]. I’ve never actually played the original game so I can’t tell you how this stacks up to the first one. Well, in Virtual City Playground you get to build your city from the ground up. There’s a bunch of missions to complete in the game and a lot of cool buildings that you can build. As you build more things you start to notice more and more people starting to move into your city. You can only do so much at a time because a lot of the game requires you to use your energy to build things. As you earn more coins you can 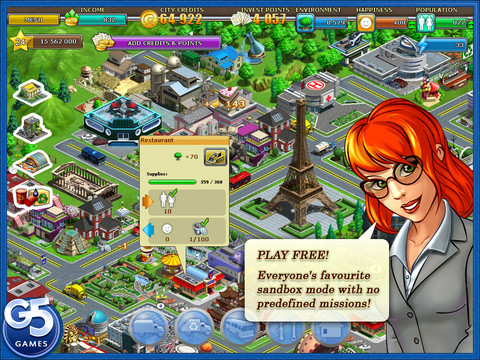 expand your city. I actually like the integration with Facebook. A lot of these freemium games allow you to post what your doing in the game on Facebook, but this game actually gives you an incentive to post that you just leveled up. If you’re new to this game like me then you might have some trouble at first. This might be the first time that you might actually have to… read the instructions. YIKES! After you get a hang of it then you’ll have a really good time with it. Even though it’s a neat game I do have a few problems with it. I find that loading your city takes longer and longer as you progress farther in the game. The progressing in the game seems a bit slow for impatient people like me. This is also a game that I feel like you actually have to make some in-app purchases to move faster, because a lot of this stuff that you need to build your city seems to be pricey. Well in the end this game is free so you can always make the final verdict for yourself. Overall I found the game to be fun, but too slow for me. My final rating is 3 out of 5 stars. Go download it today. I’m pretty sure that a FREE game won’t break your bank account! Well what are you waiting for… get your building on!