Before I begin the review I must say that there’s no way you could miss this game on the App Store if you were roaming based on the icon. Just look at that icon! It’s EPIC! Okay enough with my love of the icon, time to get into what Vermes On Mars [$0.99 (Universal)] by Aztlan Games is all about. Vermes On Mars is a sci-fi based shooter game with the setting being the “Red Planet” or Mars for short. In this game you guide 4 vehicles around in search of the assorted worms hiding in the soil. The worms pop up out of the soil whenever you get close to them. The mission is to try to defeat all the worms in a level. The controls in this game are very simple. You can tap on the left or right side of the screen to switch from moving and 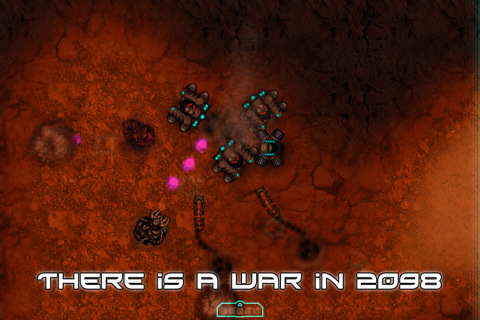 shooting. Moving your vehicles is extremely simple. All you have to do is swipe on the area of the screen that you want your vehicles to move to. Then they will line up along the area that you swiped on. When it’s time to shoot, just tap on either the left side or the right side of the screen (your choice) to switch over to the shooting mode. Just swipe on the part of the screen where the worms are at just like you would do if you were trying to move. Your vehicles will turn their attention to shooting in that spot that you directed them to. In the shooting mode you can’t move your vehicles so just tap on either side of the screen again to switch into a different mode. Each level has a given time limit that requires you to find all of the worms before you run out of time making it GAME OVER! As I mentioned before, there’s an assortment of worms that have their own special attributes. Every worm has their own way of destroying your vehicles. Some happen to be deadlier than others. Sometimes a level gets hectic so you can use some of the power-ups that you’ve earned located at the bottom of the screen. There’s a power-up to heal your bots, to destroy all the worms in sight coming after you, and even more. At the end of each level you gain money that you can use in the workshop to upgrade your current bots weapons, health, and magnetic field. You can also purchase 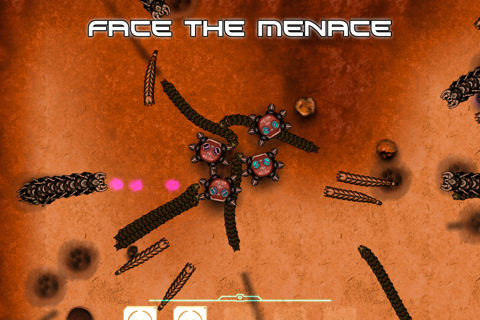 new bots that are much stronger than your previous ones. There’s currently over 30 levels to play through so you’ll have enough to upgrade your bots. The only bad thing is that you can’t replay levels that you’ve already beaten. Other than that this game is a lot of fun to me. Overall Vermes On Mars is an entertaining sci-fi shooter with nicely done visuals and a great user interface. My final rating is 4.5 out of 5 stars. It would be 5 out of 5 stars if you could replay previously beaten levels. You can check out Vermes On Mars by Aztlan Games for only $0.99 here. It’s also universal so that’s a plus!