In this last week prior to Christmas Google’s Play Store is brim full of new apps and games, which at this time of year should thrill or android users as they now have the time to select the last few favourite apps before the rush of workaday 2016 strikes in full force.

Scribblenauts provides creative thinkers with an ideal pastime game that allows players to if they so desire, type in a number of words, such as nouns with adjectives from which the app will then generate a number of items in order to solve puzzles. Ever thought of pink elephants or a hippie in a suit would allow you to complete challenges you are faced with? Now players can give this thinker a good go while they have the time this festive season, relatively logical solutions are necessary to resolve challenges, Scribblenauts retains a modicum of open-endedness, considered sufficient enough to allow for loads of flexibility in your creation. 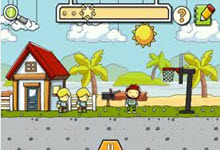 Habitica, is a fantastic new to-do list that uses will be able to knock off tasks from like a brand-new fantasy hero. Getting everything done in a normal workday can be truly tough at times and especially so when juggling an overloaded work schedule. This type of workday makes it easy to lose focus while using the usual to-do lists and task managers. This app offers its users a thrill found in its fantasy role-playing that offers game hero style levelling, which amounts to a gamified to-do list. In its latest iteration it rewards its users for completing their everyday tasks, including the mundane activity of taking out the trash, or finishing home studies.

Katy Perry Pop offers players an app, built in the typical Glu mold like the Kim Kardashian: Hollywood smash hit. This app allows its users to create their own music careers or remaining under the guiding hand of Katy. Players start-off as a singer in a shop that managed to catch Katy’s ear, two in time develop their own songs, while selecting their characters personal brand and style. Players will also start performing in front of an increasingly doting fan base, while travelling the world.