Space Trooper USA is a new dual-stick shooter from Bento Studio. From the start menu, after a loading screen which gives you a little bit of background, you’re thrown right into the action where you fight off wave after wave of enemies that get increasingly more difficult as you progress. Meteors crash down onto the asteroid that you’re on in random areas, releasing enemies and one big mother enemy that will keep spitting out a certain number of enemies until you kill it. The further you get into the game, the harder the enemies, and the more meteors crash into the asteroid.

This game is a high-scoring affair from the start, and the scoring system is pretty decent. You can get combos for killing enemies in quick succession, and there’s also power-ups, some of which give you a faster firing rate, or more points for each kill. There is only one mode, and that’s the endless wave mode. There’s also no options available, making this a bare-bones kind of game.
But what is here in Space Trooper USA is an action filled dual-stick gunning rampage with great looking visuals. The game is not supported by retina display, which is pretty upsetting, because the dark and atmospheric asteroid is constantly being destructed by your plasma shots, meteors, and exploding enemies, and reconstructed with a power-up that makes you invincible and restores the asteroid to it’s normal state, and these destruction and reconstruction physics look great, even without HD graphics. The music and effects also add quite a bit to the atmosphere of the game, making it even more intense and dark. 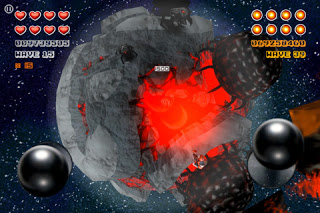 The enemies increase in difficulty as you progress from wave to wave, and there’s a lot of variation with them as well. The artificial intelligence for them isn‘t really anything special, they really just follow you around and go to the point where you‘re standing, but with the rate at which you can kill them, and they‘re spit out of the mother enemies, you will constantly be backed into a pack of enemies by another pack coming right at you. It gives the impression that the aliens are working in packs against you.
The power-ups in ST USA are great, and have quite a bit of variety. There’s 7 different power-ups, each of which are permanent, except for the invincibility/asteroid regeneration upgrade. There’s health, plasma shots, fire rate and speed increases, shot power increases, and score increase power-ups. Each of which effects how you play pretty significantly. Each time you kill a mother enemy, a power-up is dropped, and it will be one of 3 groups of power-ups, which change every couple seconds to a different power-up. Getting to the power-ups before they disappear can prove to be very dangerous later in the game, and grabbing the power-up you want can be even more difficult because you might have to wait until it changes into the power-up you’re trying to get. Bento Studio did a great job with this, as it does add quite a bit of strategy and tactical gameplay to Space Trooper USA. 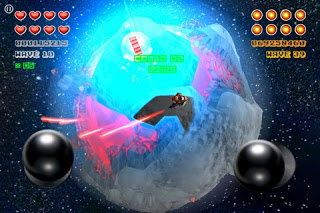 Controls are your typical dual-stick controls, they are very responsive, and work extremely well. To use a plasma shot, you double tap your right stick, charging the shot, and then aim with the stick, and release to fire, and regeneration of the asteroid is done by holding down on the right stick as well. This lets the game flow really well, and you really don’t need to think about what your fingers are doing while in the heat of battle.
All-n-all, Space Trooper USA is a solid dual-stick shooter that could use some options, more info on the story, and maybe another mode or two, along with an HD graphics update. Though none of this really hurts the game much, they are things which would be great additions for future updates. With the game only being $0.99, it’s well worth the purchase, as a pretty hectic high-score battle has already started on the GameCenter leaderboards. If you’re looking for an intense, dual-stick, action-arcade game, Space Trooper USA will get your heart pounding, and give you hours of great high-scoring entertainment.
I’m giving Space Trooper USA a score of 8/10.
Link: http://itunes.apple.com/us/app/space-trooper-usa/id439890015?mt=8
Posted in: 0.99, Action, Arcade, Dual Stick Shooters, Syntheticvoid