If your reading my words right now chances are your not much of a book person.  But what if you had a game that was a blend of a book and a game all at once?  That unique blend can best be described with one simple word, gamebook.  And that is exactly what this game is except with a lot more RPG elements than others of its kind. Apparently this game was adapted from an actual book series so if you a fan of the books then youll probably love this adaption.
Starting off you are given the selection of starting your adventure in the first Fabled Lands gamebook or the second one.  I don’t think the storyline differs between the two but just to be safe I stuck with the first one. You have the ability to choose between 6 different classes and whether your character is male or female. Your class certainly changes some of the decisions of the game and the way you play it so there is tons of replay value to be had here.   So as to not ruin the experience for you I will not give away any details of the story as that is the main element of the game and for you to interpret on your own. 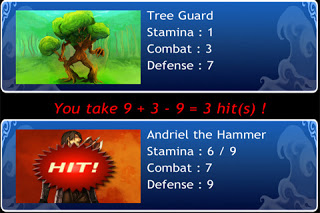 As you progress through the game you are  given options of what to do like for example go to the tavern, or investigate the poison ivy bushes.  Different outcomes come from these actions and influence you in different ways like needing to go to an inn because you drank too much beer at the tavern or having to buy a medical solution because you mistakenly used the poison ivy as toilet paper.*  Also you may run into a battle or two by choosing to venture into the forest or take the path up to the fort.  Among the options you may encounter over the course of the game include how you sneak up on your enemies like by using magic or using the shadows.  Depending on how much prowess you dedicated to that specific skill you will either pass the action and move on to assassinate the boss or fail miserably and be forced to run away sometimes loosing your items and gold which can set you back substantially.  Often I felt discouraged by the fact that you never really knew for sure if you were prepared for a quest but once I get the hang of the unique mechanisms im sure ill catch up.  When your in a town you can of course buy important items like potion or swords or accpet quests from the guild.  Its basically a free roam game and you are only limited to your imagination as most game events like battles are random.  The battles are turn based and your stats and weapons are taken into account when judging the max attack damage on the enemy.   You dont have to push any buttons or select options during a battle as they are all entirely automated. 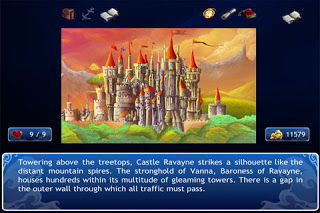 The hand drawn art at each scene is absolutely beatufil and captures the fantasy mood of the game spectaculuary.  The soundtrack is also very fitting and is very relaxing to listen too.  Multitasking has been included as well so its good for pick up and play sessions on the go or on the job. The price may be a bit steep for some but the game is  definitely worth the admission price.

Overall this is a breathtaking game that puts the reins in your hands and lets you choose your in-game destiny.  With tons of replayability and many different situations this one will last you a while.  I give it a 4.5/5.
Link:http://itunes.apple.com/us/app/fabled-lands-ii-gold-edition/id451019342?mt=8
*please note that some of these situations e.g(poison ivy) are not actually in the game and were used for comedic effect.