To any person who purchases lottery, it is somehow tiring. The tiring bit comes when you need to keep in mind the numbers and redeems. This may make one to spend a lot of time. Due to these tiresome experiences, AutoLotto came in. AutoLotto simplifies the players work. Everything which is done manually has been computerized such that you only need a Smartphone to purchase, check numbers and redeem lottery tickets. 166,000 users had anticipated the release of this app and pre-registered prior to its launch via the Apple store. Those who pre-registered were lucky enough to receive some free tickets as a thank you. 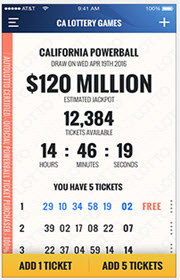 Many were asking why Matt Clemenson and Tony DiMatteo couldn’t launch AutoLotto nationally. Answering, they explained that they saw the need to first consult state lottery directors state and other pertinent legislators before launching nationally. DiMatteo said that they didn’t want there to be a conflict and that’s why they needed to follow the laws to make sure that retailers and users could play without any worries. As a result, AutoLotto will be opening offices in the states where the tickets are bought by users in order to facilitate winning tickets.

The small offices will enable AutoLotto staff to take the users relevant data and anything users may require. This will help them to notify the user who wins by announcing the winning number. As the app is automated, many fear that in the case of a fire outbreak the data will be destroyed thus undermining player information. AutoLotto co- founders said that all the tickets are insured to ensure that all winnings will be paid in the unlikely event something of this nature occurs.
As per the rules pertaining to the Powerball lottery, users are only allowed to buy one ticket and use quick pick numbers exclusively. Later on, players will be able to purchase a greater number of 20 tickets per draw and pick their preferred numbers. AutoLotto has generated $2.4 million in financing and will offer tickets for the multiple lotteries.