Mech Guardian
SunTownship
Casual arcade games are kind of a staple of the AppStore. Easy to learn, easy to control, hard to master, score chasing titles have the possibility of drawing every type of gamer in. However, because of their crazy popularity, it’s fairly hard to find titles that stick out, and offer interesting and addictive gameplay. SunTownship, a 4 person development group based in China, has just released Mech Guardian, a title offering just that; interesting, addictive gameplay that stands out in a sea of titles. Great mechanics, enough challenge to keep hardcore gamers hooked while still remaining approachable for casual gamers, fantastic graphics, and a high-score chase that always leaves you with that ‘one more go’ desire.

The premise is simple. Use your mechanical creature to keep a body of water full of polluting robo-creatures clean for as long as you can by skimming across the top of the water, and using a claw to reach down and snag the ‘enemies.’ As you collect enemies, and raise your score, you progress through levels, with each level releasing more of the robotic sea creatures. So long as you can collect the creatures before they spew out their exhaust, polluting the water, you’ll be able to continue playing, raising your score, and quickly reaching more challenging levels. The enemies do warn you before they pollute the water, by having a red light on their backs start blinking and then blink faster and faster until they dump their waste.
There are quite a few different enemies, each with different swimming patterns, swimming speeds, sizes, as well as scores. There are also some enemies which you can not grab unless you activate a short term big claw power-up. This power-up allows you to grab any and all of the creatures in the water, as well as not having to worry about the size of the enemies slowing your claw down. It can also reach a little bit further, so you won’t have to move all the way over to the left side of the screen to grab an enemy that’s down towards the bottom of the water. Along with the super claw, there’s also a speed power-up, and bombs which are all collectible as orbs, and mixed in with the sea creatures. You’re also able to get a couple of these power-ups free every 24 hours in the game’s store. 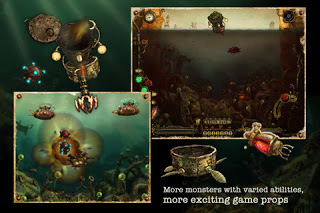 The controls in Mech Guardian might seem a bit confusing at first, but after the first game, they’re pretty easy to get. Tilting your device will move your guardian across the top of the screen, while a gauge at the bottom of the screen lets you control your claw movement. It might have been a little easier to get comfortable with if the claw control was put in up-side-down, as the lower half of a circle, but it’s not too bad as is. To shoot your claw down, there’s a button on the movement gauge, and all you need to do is tap it. For the power-ups, there’s 3 buttons on the left side of the screen, each with a picture next to it of the power-up they represent.
The graphics and music are fantastic, making this score chasing arcade game pretty immersive, especially with headphones. The almost steam punk styled graphics are nice and crisp, and with Mech Guardian being Universal, they look great on both the iPod and iPad screens. Along with the chilled out ambient type BGM, it creates a sort of bittersweet melancholy atmosphere. 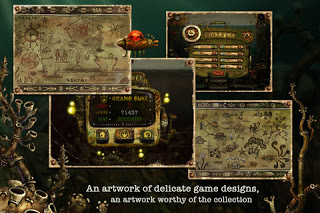 Even though there’s just one mode, and an upgrade shop or something along those lines would have really helped to round out the game. With the price at $1.99, being Universal, supporting GameCenter with a leader board and 16 hard to snag achievements helping to add to the replay value, all pilled on top of the fantastic, high-quality gameplay, makes Mech Guardian very easy to recommend. SunTownship has definitely provided a top notch gaming experience, and I can’t wait to see what they bring to the table in the future. If you’re a fan of the genre, this is definitely a title you should squeeze into that folder of great arcade games that will be locked on your device for a long time.