Anti-gravity platformer games are really un-explored territory when it comes to iOS games. Actually, I can’t really think of one title that has taken complete advantage of gravity mechanics. Until now. Inertia: Escape Velocity, developed by Red Fly Studio, could very well be the first iOS platformer game to seriously manipulate gravity, using the mechanics as the core of the game, and they pull it off perfectly. I guess it should be brought up that Red Fly Studio has built Inertia: Escape Velocity expanding on award-winning gameplay that won Best Non-Professional Game, Achievement in Gameplay, Technical Achievement, and Gamers’ Choice Awards at DICE’s Indie Game Challenge this year (2011).

You’ll guide a robot who has crash landed on a distant planet through 35 levels, collecting items that you can use to put your ship back together. The fun part? You can manipulate gravity, and use a ton of interesting objects to get you through hazards and around difficult corners of the levels.
Now, we’ll get to the physics in a second, let’s go ahead and get everything else out of the way first. Graphics; The graphics in Inertia are top notch. On retina display, the game looks absolutely beautiful. The character model is done perfectly, and the animations for movement, jumping, even landing, and landing after moving in the air fairly quickly, which is an awesome looking animation, with the robot skidding on the ground in a great pose, are all perfect. The backgrounds you’ll be playing against are eerie, and immensely add to the great atmosphere of the game. As for the foregrounds that you’ll be running around on, they are put together in incredible ways. The actual level designs, and paths that you’ll need to take in order to progress through the game are, to say the least, very well thought out, but the actual objects used to put these levels together are fantastic. Utilizing rocks, and what looks like the landscape around the planet, every piece of the level, every platform, and wire hanging down fits perfectly together, and adds to the aesthetic feel of the whole game. In short; The whole graphical design and layout of the levels, backgrounds, environments, objects, items, everything within the game, is sheer genius.
The one bad thing about it all? On an iPod screen, your character is a little under a centimeter. The game does automatically zoom in for some sections, but not often. This does allow for large portions of the levels to be shown to the player, but can take a little getting use to, and really, you might never get use to it. The game feels like it’s not meant to be played on the small screen, and will most likely have you wishing you owned an iPad, or that your iPod could hook up to your TV for video.
Now to the core of the game; physics and controls. Control-wise, you’re given the standard platformer layout of left and right buttons, along with a jump and secondary use button. This secondary use button brings us to the physics, and is your inertia button. Pushing it creates a small gravity field around your character, allowing him to use his momentum to keep moving in whatever direction he’s going until you let go of the inertia button, or he hits an object, sending him in another direction depending on what way the object is facing. If you can’t already imagine, a development team that uses these controls and core mechanics to their full advantage would be able to come up with some extremely interesting situations for gamers to play through, and Red Fly Studio just so happens to be a development team that has done this. Throughout the levels, you’ll be able to interact with walls that slow you down, speed you up, or make you stick to them, while using the inertia button. There’s also gravity fields that push or pull you towards them, fan-like objects that throw you in the direction they’re facing, walls that you’ll need to be going a certain speed to break through, areas that look like moving particles that are generally used on the floors and ceilings, pushing you up and down, angled platforms, and electric fields that you’ll need to avoid all mixed in with these interactive objects. 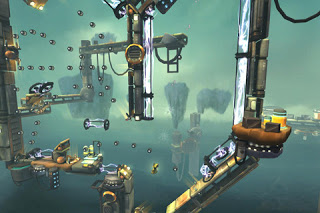 Inertia: Escape Velocity is, to say the least, a huge game. The 35 levels all have 3 badges for you to earn, one for completion, one for picking up all of the bolts in the level, and another for finishing the level in a certain amount of time. Getting each one of these will require multiple playthroughs. Once you beat all 35 of the original stages, if you want more, you can purchase another 24 levels, each called the Inferno levels, which are the original levels, but set up like challenge levels, with increased difficulty, and different objects to use, more hazards, and a certain amount of big red bolts to collect so that you can open up the Mastery Levels, which are 5 of the hardest levels in the game, each also having the 3 badges to try and snag, all for $0.99. The original game is $1.99, so for all of the levels it’ll be $2.99. But if you decide not to buy the extra levels, the original 35+ levels will give you quite a bit of gameplay, taking about 4 hours to complete, not counting all the hours you can sink into them going back trying to grab all of the items and beating the level times. For the price, Inertia: Escape Velocity is an amazing game, and a definite must buy. It’s very quickly moved up to the #4 spot on my top 5 games of the year, making it incredibly easy to recommend to any and all platform and puzzle lovers.