As stated in our review of Chicken Rescue, Ayopa Games recently released two published games last week. The Scrabble meets Tetris type of word game, W.E.L.D.E.R., developed by Highline Games, would be their other title. This world-game has already reached #1 for iPad, is the iTunes game of the week, and is pretty high in the iPod charts, along with sporting a pretty nice trailer, so we figured we’d see what all the fuss was about, and give it a try. 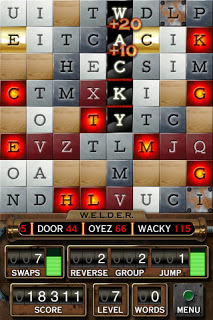 The basis of the game is pretty simple. Swap around tiled letters to make words consisting of 4 or more letters, removing them from the screen, gaining points, while using the fewest amount of moves. The letters are scored depending on their color, with 1 point for lightly colored tiles, 2 for medium, 4 for dark, 8 for red, and then bonus tiles which multiply your score, or give you 10 or 20 points. There’s also wooden tiles which you can double tap and make any letter you like, but they give 0 points, and remove a swap from your available swap amount (which starts off at 25). Your final word score is totaled as the total of all the tiles, multiplied by the word’s length, and then additions or multipliers of the bonuses. There is no time limit, so you’re able to take your time and really come up with the best words you can. After you come up with a certain amount of words, you’ll move on to the next level. For instance, to beat level 1, you need to make 20 words. At the end of the level, the amount of swaps you have is multiplied by 25, and that’s given to you as an end of level bonus score. Sound confusing? It’s not really. Pretty much just make as many words as you can with the fewest amount of letter swaps, and you’ll score big. But as you level up, you’re given additional kinds of swaps. Level 2 gives you 2 reverse swaps, which lets you make words in reverse, draw a line through them, and double tap the word to flip it around so that the word will be counted. More nifty little swap tricks are added as you go up in level.
Now, I won’t lie. I find almost all word games pretty boring. The only reason I played Scrabble with my family when I was younger was because I liked keeping score and doing all the math. The scoring system in W.E.L.D.E.R. is a very nice addition, but it’s all worked out by the game, so it really comes down to making big words. And the game is actually really enjoyable. The addition of the falling tiles that can cascade down to make more words adds an extra bit of match-3 type strategy to the mix, and figuring out how to get a high scoring tile down to make a word without using a lot of swaps by making words under that tile, and having it fall down to where you need it feels great when you get it just right.
The addition of GameCenter leader boards for highest score, total points scored, total words, total palindromes (words the same forward as reversed – level, radar…), and biggest word score, along with 47 achievements which will take quite a while to fetch, add quite a bit of challenge and replay value. The graphics, animations, and sounds don’t really mean much in a game like W.E.L.D.E.R., but they are very professional, and fleshed out. The movement of the tiles is smooth, the look of the game is great, and the sounds fit it to a T. 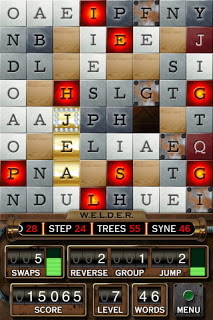 Some players might want to be able to make words diagonally, or in reverse/upside-down, instead of left to right and up to down, but the way swaps are added later in the game, and the different mechanics that you’re given to do as you level up adds so much more to it than making words in any direction ever could. $1.99 (sale price, W.E.L.D.E.R. will go up to $3.99 soon) is a fantastic price for the amount of gameplay you’ll get out of W.E.L.D.E.R.. Highline Games has made an amazing word game, even for people who really don’t like word games have a chance of getting hooked fairly quickly, and Ayopa Games has done a great job seeing the potential in the title, and publishing it. Hopefully we’ll see more great games from both from developer and publisher in the future, because W.E.L.D.E.R. carries with it a lot of future potential. Just giving it a try might end up changing your perception of word games.
W.E.L.D.E.R. gets a score of 5 out of 5.