Shoot-em-ups have expanded quite a bit since Cave hit the iOS scene in April of 2010. However, very few games have done what Cave’s releases have done for the scene, so it’s nice to see a developer realize this, and take the genre in completely different direction. DarkWave Game’s new title, Act of Fury: Kraine’s Revenge, is a different kind of shmup for fans of the genre. A game in which, instead of shooting your enemies down, you get as close to them as you can, disabling their systems, and taking them down with a tornado like force that surrounds you. 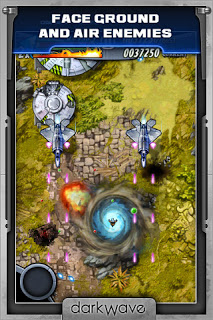 To start things off, the graphics in Act of Fury are great. I have run into some slight jumping around of the screen when the levels start to scroll left or right, or zoom in and out, like when an air-strike comes in, however it’s nothing game-breaking, but is noticeable, and should be brought up. Aside from this, the variety with enemies is nice, the 4 different environments look great, and the animations are fantastic. The music and sounds go along nicely in passing on the feel of the world in Act of Fury as well.
Gameplay-wise, you’re able to use two different controls schemes, both involving relative touch controls. One gives you a 2:1 movement ratio, while the other gives you a 1:1 ratio. Generally with shmup games, a 1:1 ratio is preferred, so it’s nice that DarkWave included it as an option, but the whole game plays and feels better with the 2:1 default movement. There’s 9 Stages, each with a Normal, and Hell difficulty mode. In the Normal Mode, you’re able to disable enemies projectiles by attacking them (moving next to them), while in Hell Mode, the enemies will keep firing at you no matter what. There are items that you can pick up by destroying buildings, extra lives, bombs, shields, and items that stop time, but if you don’t use an item that you’ve picked up before you pick up another one, it’s gone forever. A big part of the gameplay is waiting until there are multiple objects on the screen that you can destroy, and trying to destroy them all at once, building up your combo, and Fury bar, which is displayed under your health bar, and increases your damage radius, total damage, and increases your score quite a bit. Mastering how to build up your Fury gauge and destroy as many destructible objects at a time is the key to scoring big.
Each of the 9 stages offers 3 star ranks which are based solely on your score. Not at all on how many times you get hit, or how many lives you loose, which is fairly different from every other shoot-em-up game out there. You’re then able to use the stars that you earn to ’buy’ upgrades and power-ups in the shop. There are some more powerful upgrades that you can only use in Hell Mode, which helps drive players to play the Harder Difficulty after beating the Normal Mode. You are able to change how you allocate your stars for power-ups before each stage, so experimentation does come into play, which is a great addition to the core gameplay. I should mention that ,right now, there seems to be a problem with a couple of the stage’s rankings, but is being worked on by the developers and gamers, and a fix for the one or two levels with un-balanced score/star rankings should be available fairly soon. 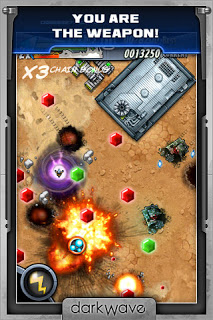 Act of Fury is a very interesting addition to the shmup genre. It does a fantastic job of mixing the Spirit/Bit Pilot/Silverfish type mechanics with shmup influenced gameplay, and presenting it all in an extremely polished and well rounded package. There are GameCenter and OpenFeint leader boards for each of the 9 stages in both Normal and Hell Modes, as well as a total score leader board for both Modes, along with 32 achievements, all adding immensely to the replay value, which, once you get into the Hell Mode levels, is already fairly high. With the price being $2, it’s definitely a game that’s worth every penny, and then some, especially if you’re a fan of the shoot-em-up genre. Act of Fury also runs on 2nd GEN devices, which, with this genre, is fantastic news.
Act of Fury: Kraine’s Revenge gets a score of 4 out of 5.