Shoot-em-up games have been making a huge comeback over the last couple years. Mainly because you can now play old favorites like R-Type, Earth Defense Force, Galaga and Battle Squadron as well as newer games, like Fast Striker, Deathsmiles, ESPGaluda and DoDonPachi all on a mobile device with touch screen controls that make previously hard to pull off with a joystick moves as easy as swiping your finger across a screen. Mixed in with these classics and new favorites, we’ve been given quite a few new and amazing bullet hell and shmup titles. Enborn-X, by Lantansia, is yet another example of this. 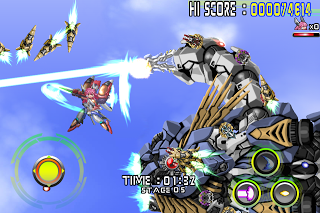 This endless boss battle structured game is a blast to play. There’s two different control methods, both being tight and easy to use. One option is a joystick, while the other is relative touch control, and both have 3 different buttons for attack options. Each attack has it’s own percs as well as weaknesses. Your spread shot can cancel out certain types of shots from the bosses, while some projectile shots go right through your bullets, a laser that you need to charge while avoiding the onslaught of bullets coming your way, and an incredibly strong up close and personal punch attack that, well, you need to be up close and personal to use.
In order to max out your score against each boss, you’ll need to pick them apart, destroying them piece by piece. You can go straight for the middle of them, destroying them fairly quickly, but doing this will cause your score to suffer quite a bit, and in a high-scoring game like this, that’s a big no-no. For each piece of the boss you destroy, you’ll rack up points while shooting that piece, as well as get a bonus score for destroying it before moving on to the next piece. Starting at the edges and moving inward is essential, but also comes with quite a bit of risk. Generally, the edges of the boss are the pieces that shoot out the most bullets. This means you’ll need to get use to weaving in and out of them while attacking instead of staying in the middle and slightly moving to avoid the missiles and big lasers that you’ll usually find there.
The graphics and animations in Enborn-X are very exuberant, and it can sometimes be hard to focus when each new boss is spawned from the orb that you’ll be fighting. The animations for this are great, each bit being flung out of the last in true overdone anime style. In short, it looks awesome. The animations for your character are pretty typical of shooters, but match the style of the game very well. It would be nice to see one or two more moves incorporated to the melee attacking, as right now you punch twice over and over again, adding in a kick or super twirl punch or something would have been a great addition, but as it is, you’ll be focusing more on how much damage you’re doing with those punches than what your character looks like while pulling them off. The sounds and music go together with the anime style too, being full of energy, and adding to the overall feel of the game. 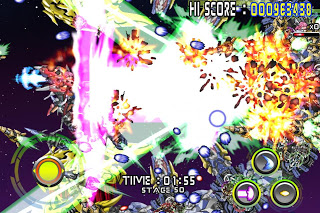 Now, with the game being done in true anime style, it’s amazing that it’s only $1.99, as most anime entertainment is usually premium priced, and with the amount of replay value, and the sheer exaggerated amount of action that’s in the game, $1.99 is a great price. EnbornX is also Universal, and compatible with iCade, giving gamers even more reason to lay down a couple bucks for it. Of course, a high-scoring game like this wouldn’t be complete without OpenFeint and GameCenter leader boards, now would it? Highest score and highest stage boards are included, as well as having 15 different hard to snag achievements. Lantansia has proven that they can make an over the top game that fits within the growing genre as well as expands it. Hopefully we can see another mode or maybe more weapons and characters in future updates, but right now, if you’re a fan of the genre, Enborn-X is a great buy.
Enborn-X gets a score of 8 out of 10.