Bad Bugs On Fire is a tap-arcade game from Dan Themikman. In it, you try and keep your flowers safe from bugs by shooting them with rays from the sun, and moon, while they move across the screen. There’s 20 levels, and once you complete those, you unlock a special endless survival level. 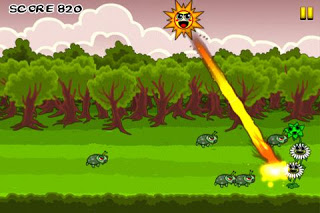 The controls in Bad Bugs are simple to use, understand, and master. There’s 3 flowers, each having it’s own row that various bugs will follow while trying to get to the flowers. Tapping anywhere in this row sends rays from either the sun, or moon, depending on which level you’re on, that kill the bugs, with each of the different bugs requiring a different amount of rays to hit them before they die. Once the sun or moon hit’s the middle of the sky, you’ll shoot a beam of energy down onto the ground, and to move this, you simply hold down and drag where you want the beam to fire. There are two different types of clouds that fly through the sky, white clouds, which double your score for a short period of time, and black clouds, which drop different things on the grass, sometimes a bug, sometimes a green bug eater that will help you fend off bugs, but each of the clouds needs to be hit by rays in order to be activated. Sometimes you’ll have no choice but to hit them, because they’ll fly through your line of fire, moving slower than the bugs, and the only way to kill the bugs before they eat a flower is to shoot the cloud so it disappears.
The graphics aren’t bad, and sort of have a cartoony feel to them. The flowers dance around while you’re playing, and almost everything has big eyes. The animations are good, from the bugs walking to the flowers moving, and the clouds in the sky, but I especially like how the beams of energy look; like a little beam influenced by 70’s art – nicely flowing, and kind of trippy.
To get through each of the levels, you’ll need to make sure that the bugs do not eat all of the flowers. If you loose 2 flowers, you’ll complete the level, and those two lost flowers will show up again at the start of the next level. Every 2 levels, a new bug will join in the fight, and you’ll need to figure out how to deal with those new bugs, and during the more hectic times, need to figure out which bugs need to be killed before other bugs, adding a nice strategic element to the game. There are no power-ups, aside from the white clouds giving you double the score for a few seconds, and you can only fire 6 rays at a time, so getting through some of the levels can be pretty challenging.
There is a GameCenter leader board for the endless level, and 10 achievements, adding to the replay value of the game, but with a leader board only for the endless level, after you get through the first 20 levels, you probably won’t have any desire to go back and replay them. This also makes it feel like the goal of the game is more to unlock the Survival Mode than to actually make it through the game. If the survival level was unlocked from the beginning, it would probably feel like more of a second gameplay mode than just something that was thrown in to give the game some sort of replay value. It would also be nice if a cumulative score was built up going through the levels, and there was a total score leader board within GameCenter, as this would give you reason to go back and replay levels to try and get a better total score, especially since the scoring system is pretty nice, having a set score for each bug, but also giving you combo scores for killing bugs in quick succession. 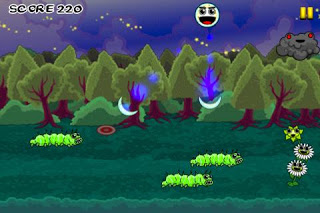 Bad Bugs On Fire is still a decent game, and well worth picking up, especially for $0.99. It’s got nice graphics, with the oh so cool looking energy beams, a nice scoring system, a fair amount of strategy, nice action, and with the endless mode, plenty of replayability. The developer has also promised more levels in the future, along with the developer asking for suggestions, so there will be quite a bit of gameplay content, and the game might just end up getting better once it’s complete. But for what it is right now, it’s definitely worth checking out, especially if you’re into arcade tap games, and is a very nice step up from Dan Themikman’s last game, Epic Pencil, making me pretty excited about what’s to come in the future from the quickly maturing developer.
Bad Bugs On Fire is getting a score of 7 out of 10.
Links:
Full – http://itunes.apple.com/us/app/bad-bugs-on-fire/id445295545?mt=8
Lite – http://itunes.apple.com/us/app/bad-bugs-lite/id446327165?mt=8
Website – http://www.badbugsgame.com/
Posted in: 0.99, Arcade, Strategy, Syntheticvoid, Tap